The revelation of a Halloween children’s book by Onur Tukel and Halloween (2018) director,  David Gordon Green, was recently announced. Based on the original motion picture screenplay of Halloween, the book has been very well received by genre fans.  We sat down with artist and co-creator of the book, Onur Tukel, to discuss The Legend of Halloween.

Horror News Network: Can you tell us about how this idea for the book came to fruition and how you and David Gordon Green came together to collaborate on it?

Onur Tukel: I was visiting the set of Halloween Kills last October and David and I thought it would be fun to create a unique gift for the cast and crew.  During production, we wrote and illustrated a children’s book called It’s Halloween in Haddonfield. It was a fun hybrid of the original Halloween (1978) and Halloween Kills, filled with silly pictures and funny rhymes. We banged it out pretty quickly, from start to finish, it took about four weeks. David’s got a boyish charm and an amazing sense of humor (if you’ve seen the comedies he’s directed, that much is obvious) and he really embraced it the process, even while he was directing Halloween Kills. There was no profit-motive behind this, he just loved the idea of making a Halloween-themed children’s book his kids could enjoy. He printed up 100 copies and gifted them to key cast and crew and that was it. I got my own copy and I thought, “Cool, there’s only 100 copies of this book in existence. That’s a pretty rarified piece of horror film memorabilia.” Not to mention, I’m a huge fan of the original Halloween (and David’s sequel) so it all meant the world to me.

A few months later, David called me and said he wanted to do a more legitimate adaptation of the original Halloween (1978), something that could actually be published for the fans. So, he pitched the idea to Malek Akkad and Ryan Freimann at Trancas Films, who owns the rights. They loved it and we were on our way. We’ve spent the last six months working with Malek and Ryan to make something that diehard fans with a sense of humor would enjoy.

Horror News Network: What did you find to be the most challenging aspect of creating this book?

Onur Tukel: The Halloween franchise means a lot to me.  I was initially worried that the fans might hate what we were doing.  Even worse, I thought it might undermine David’s trilogy in some way. I learned a lot from David and Malek about just embracing the fun of what we were doing and letting go of the things we can’t control.  Some fans will get it. Some won’t.

Self-defeat has always kind of haunted me. One of the reasons I’m so drawn to Charles Schultz’s Peanuts, is because Charlie Brown is plagued by his insecurities. One minute, he’s optimistic, confident; the next, he feels like an utter failure.

I’d say on a technical level, the challenges were drawing interiors, furniture, buildings and architecture. It’s all such a grind and I’m not very good at it. David’s no da Vinci in that department either.

My parents would have loved giving me a book like this to read growing up. They were always prone to laugh at my demented drawings. I remember them throwing dinner parties when I was in first grade or so and all the guests begging me to sketch ridiculous pictures for them. I would draw Quint being eating by the shark from Jaws. I would draw the naked character from Ray Steven’s “The Streak,” the novelty song from the 70s. I would sketch these things out at the age of six and seven, and my parents and all their tipsy friends would howl with laughter and encourage me to “draw another one and another!” It was all so innocent, but naughty too.

Before we began, that’s exactly what David said the feeling should be. “Innocent but just naughty enough that it would feel like contraband when the kids read it.”  But seriously, compared to what nine year-olds are exposed to these days, this book is rated-G.

Horror News Network: Which character or scene did you have the most fun drawing?

Onur Tukel: For me, Loomis.  He’s got those features that make him fun to draw. Wide bald head, goatee, the trench coat. You see Loomis and you know it’s him.  Annie’s fun to draw because she’s got that big wild bush of beautiful black hair. Tommy and Lyndsey are fun because of their cute little outfits and haircuts. But Loomis is the one. He kind of looks like a grown-up Charlie Brown, which I love.

In the first book, It’s Halloween in Haddonfield, David and I got to expand on Lonnie Elam and his friends’ misadventures just a little bit. We see them rolling yards, throwing eggs at cars, and that would have been so fun to really expand their Halloween night in this book. But it wasn’t part of the original so we shied away from it. We really try to stick with the plot points of the original.

Horror News Network: Was this your first time ever drawing Michael?

Onur Tukel: I can’t speak for David, but when I was a teenager, I used to draw all three 80s slasher icons fighting each other. Jason Voorhees, Michael Myers and Freddy Krueger. I liked fantasizing about the studios bringing them all together like Universal’s House of Frankenstein, where Dracula, Frankenstein and the Wolfman were all in the same film.

I will say, I hadn’t sketched a picture of Michael Myers for 30 years until I worked on David’s Halloween in 2018. David brought me in to storyboard a few scenes and it was a thrill putting him on paper again.

Horror News Network: The Halloween franchise is so beloved and this children’s book adaptation will certainly be coveted by fans. As someone that watched Halloween growing up and went on to make his own art and movies, how does it feel to now have your name associated with the franchise?

Onur Tukel: I mean, it’s all very personal for me. The original is one of my favorite movies period. I’ve known David for almost twenty years. When I found out he was resurrecting the franchise, I was thrilled. Some filmmakers are lucky to make one or two great movies in their career. David’s already made over ten in my opinion, not to mention all the great TV he’s written and directed. I would put Halloween and Halloween Kills on that list. So, look, for someone who’s plagued by self-doubt, who adores the franchise, adores making movies, adores David, it goes without saying that this has been a very meaningful project. I know it’s just a children’s book. I know its inconsequential in the broad scheme of things. But it means a lot to me.

Horror News Network: Let’s talk about your artistic style. Your work certainly has a unique look. Who were your influences when it comes to that medium?

Onur Tukel: If we’re talking about my demented paintings (like the ones you’ll see in Michael Tully’s Septien, which I believed began as a conversation between him and David Gordon Green), I’m very influenced by German Expressionism…but that’s another topic.

If we’re talking about children’s illustrations, I’m drawn to Charles Schultz and Jules Feiffer.  I’m a big fan of Andre François’ humorous cartoons. They’re so simple and clever and beautifully rendered. I think Ludwig Bemelman’s Madeline is a thing of beauty.  I’m terrified of art that’s precise, ornate and really detailed but I’m drawn to styles that are loose and simple.

David’s own drawing style is intriguing to me. It’s a simple wavering line that reminds me of Shell Silverstein.

The process for making this book was very mutual, both words and pictures.  David would send me rough thumbnails for layouts and compositions, and constantly provided notes on the art. For the text, he wrote his rhymes, I wrote mine, we combined them, revised them, argued about who’s was better and just keep working them till we were both happy.  Malek Akkad was constantly chiming in, challenging us to improve it.

In the end, we can’t compare The Legend of Halloween to the classic children’s books out there. We’re aware of that. But we’re proud of this and hope to keep collaborating in the future.

Horror News Network: In your opinion, what makes Halloween the perfect horror movie?

Onur Tukel: Well, I think it captures the dread of randomness. It doesn’t matter if you’re rich, live in a nice gated community, work in a billion-dollar government building with maximum security, or are praying in church, the boogeyman can show up anytime and take you out. He’s silent. You can’t reason with him. He kills indiscriminately. And the scariest part; he’s random. If you’re not careful, “He’s going to get you.” But even if you are careful, he could get you. In the original Halloween, Tommy hears the warning from Lonnie. He’s paranoid. He’s looking out of windows. He’s no dummy. He knows he’s out there. There’s something very personal about that dread. Especially over the last twenty years, since 911. That danger is real. I think that’s what makes David’s take so thrilling. Especially with Halloween Kills, David’s exploring something really complex about society as a whole. It’s more than a horror movie. It’s a statement on community. Who’s the real monster?  Is it Michael or something much worse? It’s brilliant.

Horror News Network: In closing, what would you like to tell our readers about The Legend of Halloween book?

Onur Tukel: If you’re a fan of the original Halloween, and you have a sense of humor, I think you’re gonna love this book. If you have kids that like the macabre, are delighted by scary stories, and have good relationships with their siblings, I hope they read it too!

Horror News Network: Thanks for your time Onur. Best of luck with The Legend of Halloween! 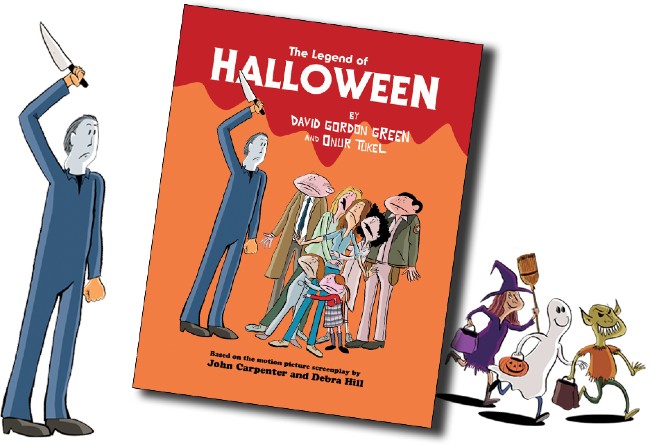