Let the shrieking start in earnest–the next Scream slasher is in the can.

Tyler Gillette–who co-directed Scream with his Radio Silence partner Matt Bettinelli-Olpin–this week took to Instagram, posting these welcome words: “Picture locked. I promise it’ll be worth the wait,” as reported by comicbook.com. The photo on this page confirms the wrap on the Spyglass Media and Paramount Pictures entry. 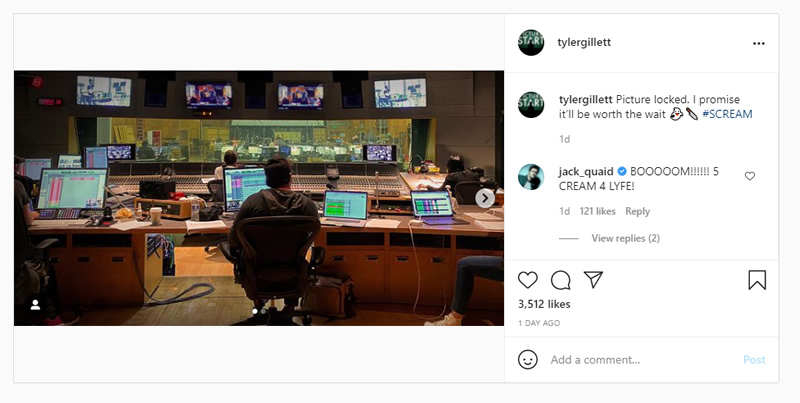 This latest Scream–the fifth installment in the wildly popular franchise and the first not directed by Wes Craven–was written by James Vanderbilt and Guy Busick. Scream is slated to hit theaters Jan. 14, 2022.

Courteney Cox–one of the returning stars in the film–sought to clear things up regarding the movie’s title. “This is the fifth one. It’s not Scream 5, though,” she said during a recent interview. “This is Scream. The directors are incredible. It’s a new franchise. It’s hip, it’s scary. It’s not a reboot–it’s a brand-new launch. I think it’s going to be fantastic.”

Gillette addressed the impact the franchise’s popularity had on the filmmakers. “There’s a level of love and respect for the world that Wes Craven and Kevin Williamson created,” he said. “So for us, it felt like the only way to do this right was to create connectivity. And you can’t have something new without also giving nod to what came before it. And giving a bow to what followed.”

The Scream franchise–which has (until now) run through 2011’s Scream 4–has been a huge hit with horror fans, raking in more than $600 million worldwide.

Keep reading Horror News Network for any further updates on Scream before its Jan. 14, 2022 premiere.