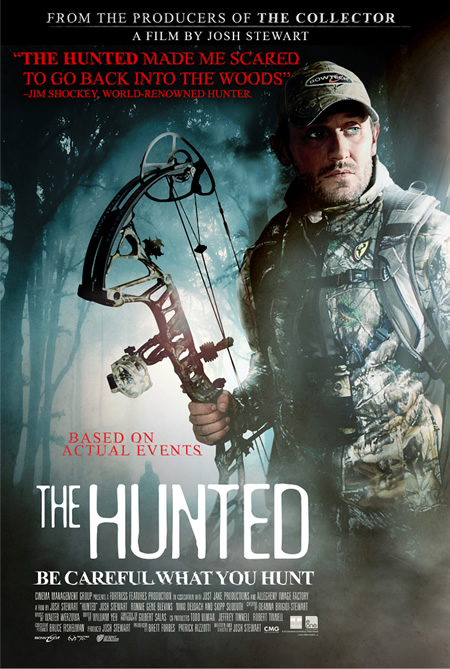 Synopsis: The Hunted follows family-man, hunter, Jake, played by Josh Stewart, alongside his best friend Stevie (Ronnie Gene Blevins) as they journey deep into the Appalachians of West Virginia on the hunt for a legendary buck. Chasing their dream of landing a television hunting show, the duo head into the dense, secluded mountains armed with only their bows and camera equipment.

The friends quickly realize there is something else that stirs within the woods. Something that, turn by turn, begins to hunt them…

Our thoughts: The Hunted is a found footage style film, reminiscent of The Blair Witch Project, using little special effects to create a terrifying film. Based on a true, unexplained hunting story experienced by director and actor Josh Stewart, this film uses the most powerful tool for scaring an audience; the imagination of the viewer.

The film starts off with Jake, a husband and father, getting his cameras and equipment ready for a trip to the West Virginia woods to film a hunting show pilot with his friend and cameraman Stevie. They travel to Calloway Outfitters to talk with owner Tony about hunting a very big buck, dubbed “Movie Star,” on the new piece of property he had acquired. As Day 1 of filming begins, they set out by rover to the far end of the property to hunt Movie Star and, hopefully, make a great first episode As night falls, they hear a woman’s screams, far in the woods. Confused and a little scared, Jake dismisses it as a bobcat, which are said to sound like screaming women when they cry.  On their way back Jake realizes his knife is missing. Back in their rooms, they find images of Movie Star on the tree cam downloads, which give them hope for the following day.

Early morning on Day 2, they find Jake’s knife, mysteriously stuck in a tree, as they are heading to the stands. Before long they hear the screams in the woods again, this time louder. When day breaks they check it out, finding only a dead bobcat, putting their fears to rest… for the time being.  By the time Day 3 rolled around, I couldn’t wait to see what was going to happen. The tension builds slowly through most of the movie. However, it keeps you on the edge of your seat. The last half hour of the film keeps you glued to the screen and sucked into the story. Though somewhat predictable, having seen so many films like this previously, it was still able to keep me in suspense.

This film is not for everyone. If you don’t like found footage style flicks, chances are you won’t like this one either. There is a lot of night filming, and unexplained noises in the woods, making an extremely creepy setting. Josh Stewart, who makes his directorial debut with The Hunted, is great as the level headed Jake. Ronnie Gene Blevins is equally good as easily spooked, cameraman Stevie. Best watched at night in a dark room, The Hunted is a great must-see menacing found footage film!