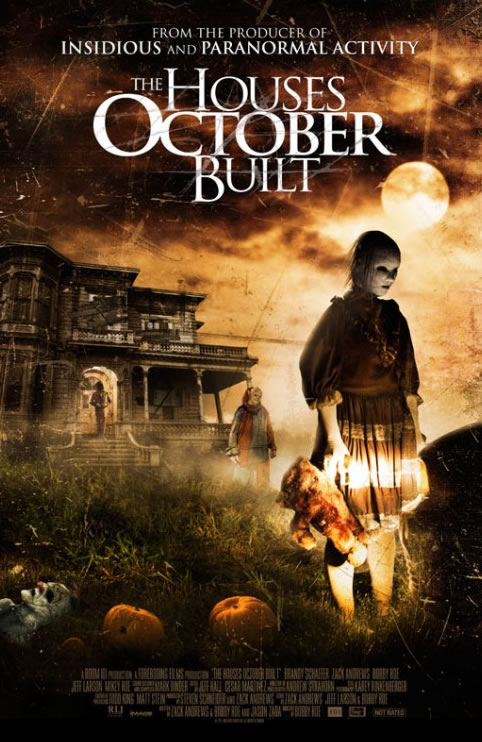 Synopsis: Beneath the fake blood and cheap masks of countless haunted house attractions across the country, there are whispers of truly terrifying alternatives. Looking to find an authentic, blood-curdling good fright for Halloween, five friends set off on a road trip in an RV to track down these underground Haunts.

Our Thoughts: The Houses October Built is a unique new found footage film, perfect to watch as Halloween approaches. The story follows five friends on a road trip to various haunts in Texas, looking for the “extreme haunt” they have heard rumors about. The film starts off documentary style, with information about Haunts in America. There are 2,500 across the country, with 30 million people going to them a year. The increased pressure to deliver the scariest haunts has led to many more incidents and injuries. While rumors of murderers being hired to work at haunts are also spread around. The footage that follows was captured by the five friends on their road trip and the rest is allegedly by the employees of the Blue Skeleton, “an underground haunt with no fixed location.”

Next we see a clip bloodied, unconscious female being put in the back of car by masked men. The film cuts to six days earlier with a group of friends partying at a bar. Brothers Bobby and Mikey, accompanied by Jeff, Brandy, and Zack, have rented an RV to go on a trip to find extreme haunts. Zack is heading the trip and has a few cameras to document the haunts. They don’t really know what an extreme haunt entails, other than it being much scarier than the run of the mill haunts, and closer to like a movie, where maybe you are hooded or tied up. In between footage of the events, there is also footage of the group interviewing workers from various haunts. The information gathered is quite terrifying. One worker says they don’t do background checks on people. Many saying they go as far as they can short of killing a person to scare them if asked to, and another saying that a young worker accidentally hung himself during an event.

The first haunt the group arrives at is “The Haunt House” in Caddo Mills, Texas. It’s your run of the mill haunt, like many found around America, with lots of scary settings and costumed actors jumping out at them. Mikey pisses off one of the clown actors, who tries to break his camera, when he climbs up a ladder and yells to the crowd waiting. The next place “Rise” in Eureka, Texas, is a zombie paintball event. When the group is going back to their RV, there is a creepy female actor from the first event, which is over 100 miles away from this one. She follows Mikey onto their RV, screams, acts creepy and then leaves. The group is a little freaked out but proceeds to the next haunt. Next up is “Terrorplex” in Mansfield, Texas. This one is even further into the woods, and even scarier, with people being dragged off, a girl locked in a refrigerator and a man being tortured. They couldn’t tell what was real and what was not. Brandy is freaked out when one of the actors says her name and tells them they are going to die.

After that, they head to “Phobia” off US Highway 248 in Texas, where they aren’t allowed to film, but Zack finally gets the password to get more information about Blue Skeleton. That night, an actor from one of the haunts gets into the RV and films the group sleeping. The following day Zack sees the footage the posted in a chat room and is a little freaked out. A short time later they find a heart on a plate in their refrigerator which really starts to scare them. Zack receives an email about the Blue Skeleton with more information and they head to the location given. Brandy is cornered by haunt workers in the rest room while they are there, and everyone in the group except Zack thinks the whole thing is getting out of hand and want to go home. Zack insists that it’s just part of the extreme haunt they are looking for and that the keep going. Things continue to get worse for the group, leaving the viewer on the edge of their seat for the remainder of the film.

The Houses October Built is a great Halloween found footage film with an original story. To be honest, I was a little disappointed that the end wasn’t bloodier, but it didn’t really need to be to be effective. You are also left wondering if it was Blue Skeleton that was following the group or not. It is an especially terrifying story for those who have been to these kinds of haunts, such as myself. The actors go by their real names, a trick reminiscent of the Blair Witch Project, in an effort to make the documentary seem more real. All of the actors do a good job in the respective roles, with Brandy Schaefer standing out with a great performance. For anyone who has ever been to one of these kinds of indie haunts, this horror flick is a scary must see! For those who haven’t, this film with make you never want to go near one. Either way, you will never be able to look at indie haunts the same way ever again after watching The Houses October Built.