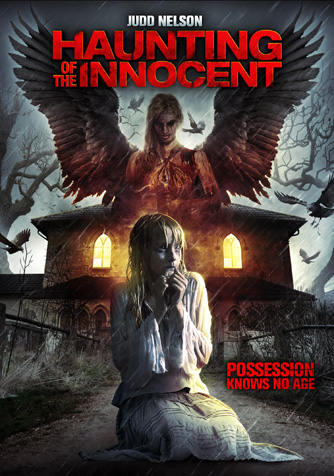 The Haunting of the Innocent Coming to DVD in January

Director Matt Hish (The Blackout) and distributors Uncork’d Entertainment are pleased to release the official DVD artwork and release date for The Haunting of the Innocent. This film was originally titled A Haunting in Massachusetts, but it has been renamed to stay truer to the film’s chilling mood. The Haunting of the Innocent will be released in late January of 2014. Also, this film is a Khoury A. Marriot and Raging Bull Entertainment production, which was produced by Autumn Federici and Justin Jones. The film stars Judd Nelson (The Breakfast Club), Jessica Morris (Reel Evil), and Rib Hillis.

In the film, a family moves into a new home, in a small New England town. Their spacious home hosts an insidious evil, which attacks Tom’s (Hillis) wife, Brenda (Morris). Their strange and violent encounter with the supernatural leads them down a path full of ancient legends. Tom knows of these legends and he will have to confront his own demons, to release his family from the clutches of a powerful and malevolent entity.

Fans of thrilling ghost stories will not have to wait long to see The Haunting of the Innocent for themselves. This title will be available on DVD and Blu-ray in just a few weeks. For now, the ghostly artwork for the film is here. The graphic shows actress Hannah Cowley as a dark angel tormenting a young girl. More nightmares will be released in late January of 2014.

Official Synopsis: Desperate to reconnect with his wife and son after a violent attack leaves them fear-stricken and traumatized, a father moves his family to a sleepy New England town and finds himself in a fight against supernatural forces hell-bent on tearing them apart.