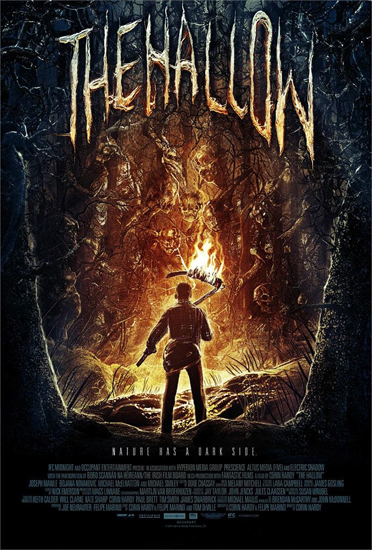 Synopsis: A family who move into a remote milllhouse in Ireland find themselves in a fight for survival with demonic creatures living in the woods.

Our Thoughts: ‘The Hallow’ is an absolutely amazing fairy-tale based horror film that is part creature feature, party bloody horror. It takes a scientific approach to the ideas presented, and makes an extremely realistic portrayal of a real life fairy tale come to life in modern times.

When a family moves to an area of Ireland where the townspeople believe that the woods belong to what they call “The Hallow”, otherwise known as fairies, they are met with resistance from the community. British conservationist Adam ignores the their warnings and trespasses on that land for his the purpose of his work. The family starts being harassed by what they think is their neighbor who has been aggressive with his warnings. It gets particularly creepy when something breaks the window to their baby’s bedroom and they see something inhuman in the woods. Despite what he sees, Adam is convinced it is his neighbor. When things reach a tipping point, the family decides to pack up and leave altogether. However, this is just the beginning of their nightmare.

The film cuts straight into the story, and doesn’t waste time on anything that is not key   to it’s storyline. It is very heavy on suspense and extremely creepy in atmosphere. I am not often scared by a film as a seasoned horror fan, but I found the first half of the film terrifying. The second half is less so, in that it becomes focused on creatures. As they are exposed to the viewers more, a different kind of suspense takes over the film. It shifts to more action-centered horror that keeps you on the edge of your seat until the end. There were a handful of times I thought I could predict the outcome, with the foreshadowing presented early in the film. However, it wrapped up in a way better than I had even hoped for.

Fairy tale use in horror is extremely rare and it is refreshing to see an original story that makes use of it.  It has underlying themes of nature fighting back against the intrusion of man. Joseph Mawle is excellent as the scientific Adam. Bojana Novakovic is memorable as terrified mother Clare.  Various horror sub genres are elegantly blended and the result is one of the best horror films I’ve seen in years.  Horror fans will not want to miss ‘The Hallow’.