Over the past few years, fans have missed the monsters, mayhem, and mirth that Eric Powell’s The Goon always provides.  Even though the artist/writer has kept busy with a variety of other projects (Hillbilly, Spook House, and tons of covers and Mondo art), Powell is about to reunite with the character that made him famous.  Powell took some time out of his busy schedule to share some news about his company (Albatross Funnybooks) and the triumphant return of everyone’s favorite tough guy in this exclusive interview.

Horror News Network:  This year is the 20th Anniversary of The Goon.  Are you surprised that you are still writing and illustrating the adventures of a character that you created so long ago?

Eric Powell:  It’s pretty weird and difficult to wrap my head around at times.  Not only has it  been 20 years since The Goon was first published, but I had been working on the character for years before that!

HNN:  The last time readers saw The Goon was in the final book published under the Dark Horse banner, Once Upon a Hard Time.  The tone of the last series was a bit darker and more serious than previous stories.  Will the new series follow the trend that you established in Hard Time or go back to “classic Goon”?

Powell:  I’ve always done The Goon without any boundaries or limitations in mind, and I’ve always taken the book in the direction that I was feeling at the time.  With Once Upon a Hard Time, the story started to become a bit too serious, so I am taking the character back to his roots in the new series.  It will be more light-hearted, which I think is something that people need more of  right now.

HNN:  The new series picks up after the events in the sequel to Hard Time entitled Lords of Misery, but that book has not been published yet.  When will fans see this bridge to the new series?

Powell:  The original plan was to release Lords of Misery first, but the schedules did not permit it, so we are going to publish it as a short graphic novel, similar to the old prestige format comics, near the end of this year.

HNN:  Do you plan on re-releasing The Goon graphic novels through Albatross Funnybooks?

Powell:  Yes, we are going to collect them in an omnibus format.  The first volume should be out in May or June and the second volume will be released before the end of 2019.

HNN:  You mentioned in a recent press release that this relaunch will also include some new artists and writers on the book.  Any announcements at this time?

Powell:  It is too early to make any announcements, but I can say that after the first story arc that I am working on, a super-talented artist will be working on the second arc.  This person really nails the Goon and the world that he inhabits and I am excited to share it when I can.

HNN:  You have been doing a lot of work for Mondo as of late, such as your recent Wolfman print and a slew of other projects.  How did this come about?

Powell:  Well, I’ve always wanted to do some work for Mondo, and one of my close friends was working with them, so he was able to get me involved with company.  The Wolfman print was a thrill, as I am huge Universal Monsters fan, and I have completed some more posters that will released by Mondo soon.

HNN:  You also produced a glass for Mondo which was sold at Alamo Drafthouses around the country that was based on Kong: Skull Island.  How was it different illustrating a glass versus more traditional formats?

Powell:  They give you a template to follow for the glasses and you have to make the ends connect.  I had never done a glass before, so if I had to do it again, I would make the lines bolder.  It was a little clunky.

HNN:  You also worked on an illustrated version of The Adventures of Huckleberry Finn, correct?

Powell:  Yes, I did that for IDW seven or eight years ago.  I have always been a fan of Mark Twain and just having my art and name on the cover of one of his novels was a great honor.

Powell:  All I can say is that it is definitely not dead.  It has been years of dealing with the Hollywood process and it is weird for someone used to working in independent comics where the ability to create something and release it is very simple in comparison.  The film industry is a vastly different scenario.

HNN:  Not only do you continue to produce a ton of art and stories, but you are also the publisher of Albatross Funnybooks.  What has it been like to wear the publisher’s hat?

Powell:  The past few years have been the most rewarding and most exhausting time in my career.  It does help you stay enthusiastic when you are responsible for all aspects of our own work and others.

HNN:  Aside from The Goon, you have also worked on your horror anthology for younger audiences, Spook House, and Hillbilly for your company.  What can you tell us about both, and do you have any plans for new series of either title?

Powell:  We’d like to keep Spook House going annually.  It is the kind of book I would have loved as a kid, but there isn’t a huge market for a kid’s horror anthology.  We’d like to see it come out every October for the Halloween season.

With Hillbilly, I always describe it as “Conan with hillbillies.”  It is a classic sword and sorcery title, but the setting is very nontraditional.  Usually these stories take place in an ancient European setting, but Hillbilly is set in the Appalachian mountains and rustic Tennessee.  We currently have three volumes of the title out, and we plan on doing a mini-series with the character every year. 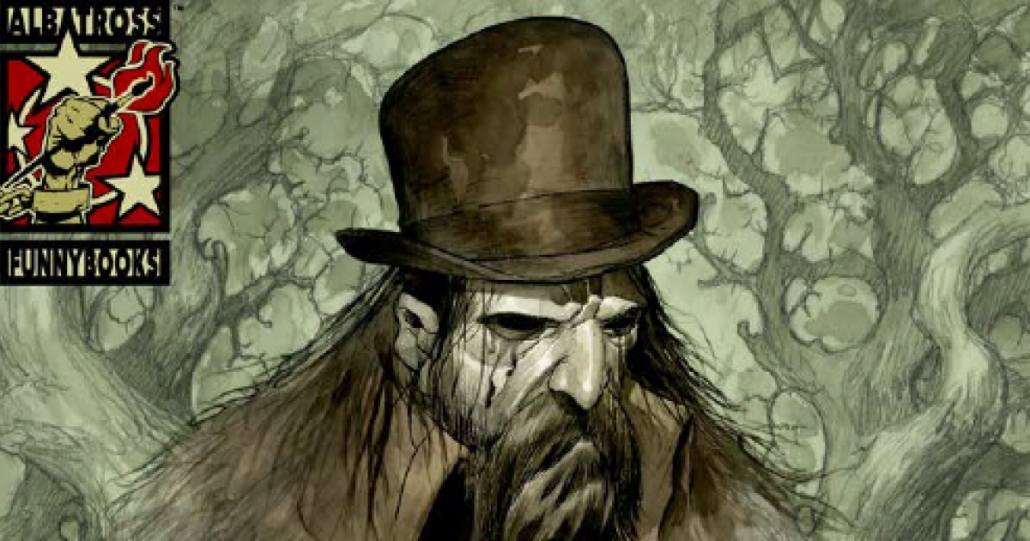 HNN:  You have a lot of unique titles that you currently publishing.

Powell:  Yes, we have some really fun original books such as Mega Ghost (by Gabe Soria and Gideon Kendall) which is like the greatest Saturday Morning cartoon that was never made, Grumble by Rafer Roberts and Mike Norton which is one of the most underrated books on the stands that deals with the supernatural in a unique way, and we are very proud of the recent trade paperback of Galaktikon by Brendon Small (Dethklok, Metalocalypse).  Brendon also released an album of the same name and a Funny Or Die Video short film.

HNN:  You also released a title that is sure to appeal to horror fans entitled ‘NamWolf.

Powell:  You can’t go wrong with a werewolf in Vietnam.

HNN:  That’s for sure!  You will also be touring the country this year for the 20th Anniversary of the Goon, correct?

Powell:  Yes, we are kicking it off at The Cannery Ballroom in Nashville, Tennessee with the official 20th Anniversary Party on March 8.  From there, we will be attending conventions and making appearance across the country.  We also have a giant slate of Goon merchandise, including Goon and Frankie Tiki Mugs.  I hesitated at first because you are starting to see Tiki mugs everywhere, but I love tiki drinks and culture, so I thought, why not.

HNN: You will also have a Goon/Grumble comic for Free Comic Book Day this year.

Powell:  That’s right.  We wanted to do an Albatross Funnybooks split comic for the event so we could represent the company as a whole.  It will be a crossover between the two characters and it was a lot of fun to work with Mike and Rafer on it.