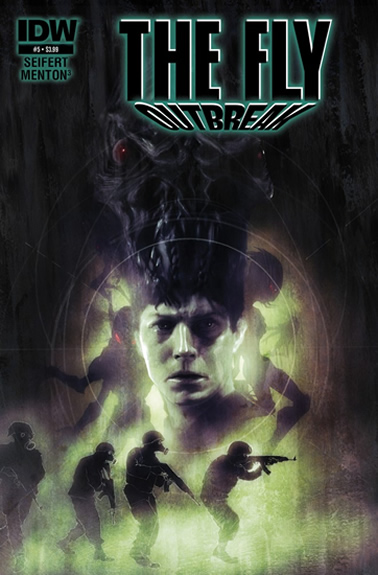 Synopsis: A disaster at Bartok Industries threatens to unleash a plague of human/fly hybrids on the world. Will Martin’s last-ditch effort stop the swarm or is the insect apocalypse upon us?

Our Thoughts: If you haven’t been reading “The Fly: Outbreak,” now would be a good time to start catching up.  At first I had no idea what to expect, or if it was going to be some sort of rehash of the film.  Much to a horror fan’s delight, Brandon Seifert and Denton Tipton pick up from where the film left off putting a new fresh spin on the tale. It centers around Seth Brundle’s son, Martin, accidentally unleashing an apocalyptic plague. Seifert has kept the series engaging with a nice blend of humanity and brutality.  Issue #5 is no exception.

As far as the artwork in the book, Menton and Stoupakis’ work is nothing short of mesmerizing.  The tones and style are brilliant.  Even the most brutal and gory of scenes appears artistically beautiful.

True horror comic fans are going to want to check out this series.  If you already have, “The Fly: Outbreak” #5 does not disappoint.  Issue #5 if this plague hits your local shop on August 5th!