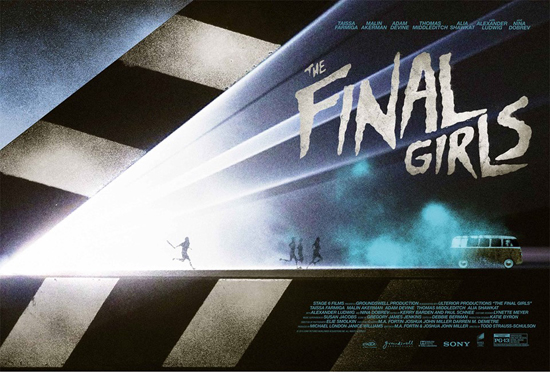 Synopsis: A young woman grieving the loss of her mother, a famous scream queen from the 1980s, finds herself pulled into the world of her mom’s most famous movie. Reunited, the women must fight off the film’s maniacal killer.

Our Thoughts: ‘The Final Girls’ is a horror-comedy that is centered around a teenage girl who loses her scream queen mother in a car accident.  A few years after her death, her and her friends got to see a theater viewing of the film her mom starred in, ‘Camp Bloodbath’, clearly inspired by ‘Friday the 13th’.

In a bizarre turn of events, the theater catches fire and when they are trying to escape they are pulled inside of the movie they were just watching, only the movie is real, and people actually die. To their benefit, they know what is going to happen and use it to form a strategy to stay alive. The decide to stick with the final girl of the film, and inadvertently end up changing the story.

‘The Final Girls’ is a truly unique horror film and has a story that is told a a totally new way. It is extremely clever and entertaining. It’s not terribly gory, however it is still a slasher. Unlike a slasher, it has a deeper mother-daughter story and has a wider audience appeal. Taissa Farmiga and Malin Akerman are excellent as the mother and daughter caught in a slasher film. Thomas Middleditch  and Adam DeVine  are absolutely hilarious throughout the entire film.  Horror and comedy fans alike will enjoy ‘The Final Girls’.