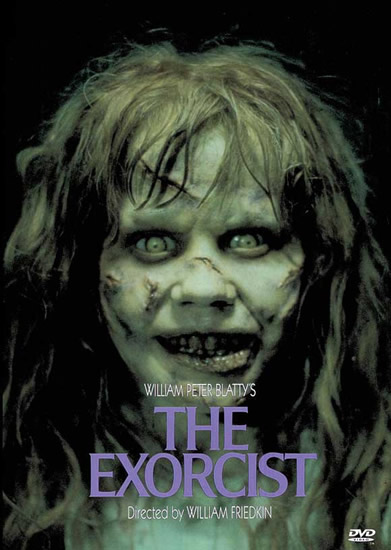 Some of us around here are really psyched for this one. The 40th Anniversary “Exorcist” BluRay Special Edition is unleashed on Ocotber 8th.

A true cinema landmark, the theological thriller is one of the top ten box-office performers of all time.* The Exorcist took 10 Academy Award® nominations[i], including Best Picture, and won two Oscars®[ii], for Best Adapted Screenplay, as well as winning for Best Sound. Subsequently, the film went on to become a multi-million dollar franchise. Directed by Friedkin (Oscar®-winner for The French Connection – Directing 1971) and written by William Peter Blatty, the film is based on his best-selling novel, which sold nearly 13 million copies domestically and was the #1 book on the New York Times Best Seller List for 57 weeks, 17 of them at number 1.

For those of you horror fans living under a rock, here’s the synopsis:
“The Exorcist tells the now-famous story of a girl’s demonic possession, and a gripping fight between good and evil. Linda Blair, in a breakout role, plays Regan, a young girl who starts to exhibit strange, arcane behavior. Her mother (Ellen Burstyn, Oscarâ-winner for Best Actress Alice Doesn’t Live Here Anymore) calls upon a priest, Father Karras (Jason Miller) to investigate. But Karras, who has a spiritual crisis of his own, is suddenly confronted with the unimaginable evil of Regan’s possession. Father Lankester Merrin (Max Von Sydow), an archeologist-priest, is called to help, and a horrific battle for her soul begins.”

· Beyond Comprehension: William Peter Blatty’s The Exorcist (NEW) 40 years after his novel was published, The Exorcist author, screenwriter and producer returns to where it all began. First stop is a cabin/guest house in the hills of Encino, California, where Blatty wrote the novel. The author visits the place for the first time in 40 years and shares not only memories of writing the book, but also discusses how it inspired him. We then meet Blatty in two key and iconic locations; Georgetown University where the film was shot, and at the now-famous Exorcist steps. Throughout, Blatty reads from his novel, including an excerpt from a chilling newly published passage.
· Talk of the Devil (NEW) – While at Georgetown University, William Peter Blatty heard about a true case of possession from Father Eugene Gallagher. At the time the film came out, the priest talked at length about exorcism, the true story and about Blatty; this footage is now available for the first time in many years. It is as revealing as it is shocking.
· Two Commentaries by William Friedkin
· Commentary by William Peter Blatty
· Introduction by William Friedkin
· 1998 BBC Documentary “The Fear of God: 25 Years of the Exorcist”
· Raising Hell: Filming the Exorcist Set footage produced and photographed by Owen Roizman, camera and makeup tests, and interviews with director William Friedkin, actress Linda Blair, author/screenwriter/producer William Peter Blatty and Owen Roizman.
· The Exorcist Locations: Georgetown Then and Now — Featuring a tour of the iconic locations where the film was shot.
· Faces of Evil: The Different Versions of The Exorcist — with director William Friedkin and author/screenwriter/producer William Peter Blatty discussing the different versions of the film and featuring outtakes from the film.
· Original Ending
· Interviews
o The Original Cut
o Stairway to Heaven
o The Final Reckoning
· Sketches & Storyboards
· Radio Spots
· TV Spots
· Trailers

Don’t forget to check out the Horror News Network YouTube channel for our special 40th anniversary look back at the film.