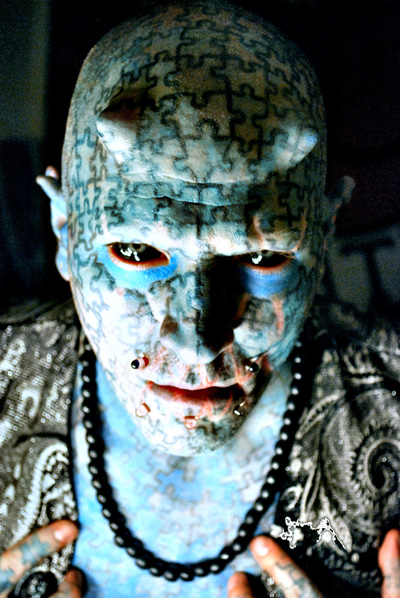 The Enigma Talks Transformation and Horror

The Enigma Talks Transformation and Horror

Horror News Network: When did you first start transforming yourself from into the Enigma?

Enigma: I got the idea in 1990 and it wasn’t until January of 1993 that I finished all of the lines. Since then I have had over two hundred and fifty artists from around the world, from South Africa to Switzerland, everyone wanting a piece of the action,all donations to The Enigma. I got the idea for horns in 1995 and during 1996 I had them replace five times to get the size. Now they are silicone and 6th of the series of enlargements. I had my ears cut into sections over the course of two days, with over 50 stitches in each ear, and have had the whites of my eyes filled with black ink to make me bullet proof. Can’t shoot till you see the whites of the eyes. HA! All of that was done by LunaCobra.net . I have had skin removed in x’s over my mouth and around my eyes. John Durante of Evolve Jewelry took care of that. I have been swallowing swords, eating fire, and pounding spikes into my skull since 1985, music lessons since I was 6.

Horror News Network: You’ve been several movies (including the sometimes overlooked “Firecraker” with Mike Patton and Karen Black), as well as a musician.  Which do you prefer as a performer music or acting?

Enigma: I do prefer acting to music but not by much. In the ideal situation music is part of the show, filmed or otherwise. The talent is music, the gimmick is sideshow and the flourish is being blue. Little did I realize when I decided to tattoo myself completely a blue jigsaw puzzle, that people would unintentionally turn off their hearing in order to see me. The movie

Firecracker, where I play an odd role, has a few selections in it’s soundtrack that I composed as well.

Horror News Network: I remember seeing you back in the 90’s with Jim Rose’s Circus Sideshow.  Over the years, how have you evolved both physically and as a performer?

Enigma: That old Lollapalooza sideshow that I co-founded with Matt Crowley, Zamora, and Lifto, was a really rough go at something I consider to be an art form. In those days, it was just a shock show where we as performers were able to experiment with something that had lost all of its life blood. Now the show I perform in, ShowDevils, is ten times more dangerous and done so smoothly that it no longer shocks people so much as gives them dreams and visions. It’s the impossible possible, a living cartoon where we, Serana Rose and myself, seem to be the strangest of super heroes.

Horror News Network: You’ll be appearing at  Mile High Horror Film festival this upcoming weekend.  What do you have in store for the crowd there?

Enigma: At the Mile High Horror Film Festival this weekend I will be doing a some of the introductions for the films, as well as bringing out and performing a satisfying slice of our American sideshow culture. It will be for the audiences to get a gander and realize that not everything in life is CGI, that luckily, sanity is not a requirement. I mean they can’t lock us all up. They don’t have enough keys. I know. I have been holding on to quite a few here in my pocket….

Horror News Network: If you could, tell us the five most defining moment s in horror for you? (It can be any medium: movies, comics, video games, etc.)

Enigma: Defining moments in horror? How about that first Resident Evil game with the cut scene with the stairs or the dogs jumping through the window?… I must tell you this. When I was a child I read and watched horror movies with the firm belief that all of it was real. I studied the classics and learned how to deal with the dark forces that threatened humanity. I was fascinated by the occult and studied parapsychology in books by authors Rhine and Pratt.  This was the seventies before everyone became a Ghostbuster.

I watched The Twilight Zone and The Outer Limits. I hung out at the local cemetery at night with an infrared film loaded camera in the hopes of capturing an image from beyond. This was real. This was something I felt akin toward. But, then the day came in high school chemistry when balancing the equation was the rule. I felt cheated. I was going to develop invisibility and all the amazing things that Dexter in those Disney films accidentally discovers. Well …where were we? Oh yeah. Zombies!!

Horror News Network: Finally, how does the Enigma celebrate Halloween?

Enigma: Ah, yes, Halloween is usually a working day for me so I’m on the stage cheating death and weaving my spell of humor gone wrong . It’s safety  third… fame and fortune first and second of course.