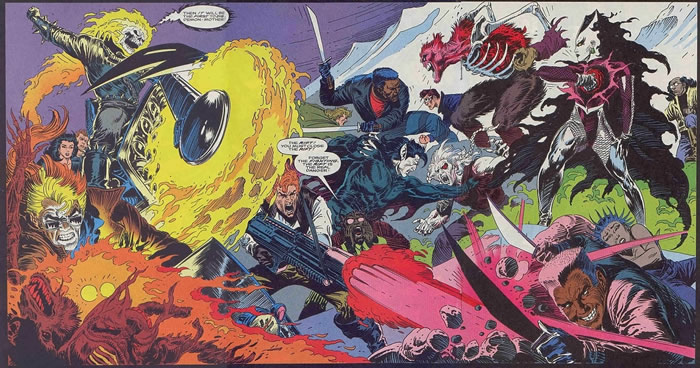 It was the summer of 1992 and the comic industry was booming.  Comic book stores were springing up around the country, fueled by new readers and speculators who imagined getting rich off of the latest issue of X-O Manowar or Cyberforce.  While this era is now a forgettable one for many fans due to the prevalence of gimmick covers and the over saturation of titles, some titles and characters are still fondly remembered today.  And if you were a fan of horror/super-hero comics in the summer of 1992, there was one title that stood out: Ghost Rider #28.  Not only was everyone’s favorite flaming skull riding high at the start of the decade, but with this issue he was about to usher in an era of supernatural heroes that would burn bright and hot for nearly three years.  Now horror comic fans would not only be able to delight in the adventures of Ghost Rider, but also with his fellow horror heroes in the shape of Blade, Doctor Strange, The Nightstalkers, Morbius, the Darkhold’s Victoria Montesi, and many more.  The Midnight Sons were born.

When the speculation market bubble burst in 1995, nearly 70% of comic book stores in the United States shut their doors.  Comics from this era could easily be found in 5 for $1 bins at those stores that remained in business, but just as time “heals all wounds”, some of the comics and characters of the speculation era are experiencing their own renaissance due to the success of comic book properties on both the big and small screens.  Due to the success of these adaptations, many fans are doing their own type of “speculating” these days; trying to figure out which Marvel hero will make the jump to Hollywood blockbuster or edgy Netflix series.  With many formerly obscure heroes crossing over, is it time for the Midnight Sons to rise?

Doctor Strange will be released on November 4th, 2016.  Just as Marvel expanded their cinematic universe with titles like Thor and Guardians of the Galaxy, Marvel is hoping to do the same for the mystical realm of Earth’s Sorcerer Supreme.  Might this serve as a tent pole for other supernatural characters?  Marvel has had success in expanding their universe into mythological locales and deep space, so perhaps a dark scary corner of the MCU awaits…

Marvel’s first cinematic success after a number of infamous straight-to-video adaptations was 1998’s Blade.  It is easy to forget that Blade was the first film to successfully adapt a Marvel character to the silver screen in this era of unadulterated box office bonanzas, a full two years before X-Men and four years before the first Spider-Man film.  The film’s gritty, anti-hero would not only influence future Marvel properties, but Blade also successfully paved the way for modern vampire franchise Underworld and other leather-clad blood suckers.  Although two sequels followed,  Blade: Trinity (the lowest box office performer of the bunch) would mark the last time we would see the half-human half-Vampire at the Cineplex.  Blade: The Series would get one season on Spike TV (starring the rapper Sticky Fingaz of 90’s rap group Onyx in the title role), but without the budget and original cast, it would soon be forgotten by the network and fans.

Once the X-Men and Spider-man franchises were firmly established (but before the modern MCU came to be),   Marvel continued to outsource their characters to established movie studios and, aside from the aforementioned franchises, they would often miss the mark.  Nearly a year before Iron Man would jump start a new cinematic Marvel Universe, fans of horror comics were “treated” to the film Ghost Rider.  Many fans had high hopes that they would be getting a supernatural hero tale in the vein of the first Blade films.  To say that fans were disappointed would be an understatement.  Although the box office for the first Ghost Rider film was a healthy one ($228 million world-wide), the fan reaction was lukewarm.   An almost fifty year old Nicholas Cage playing the teenage Johnny Blaze certainly didn’t help the film, but the casting was only one of the many problems with it.  Fans had a hard time recognizing their favorite Satanic hero from the comics, and a convoluted plot and wooden performances and direction only made the experience that much worse.  But with a box office total of over $200 million, a sequel was inevitable.  Spirits of Vengeance was released in 2012, right when the Marvel Studio films started to set a new standard for comic book adaptations.  The sequel was still grounded in the pre-Marvel era, and it showed.  Reviews were especially savage and with a declining box office take, we would not see a three-peat.   None of the supernatural heroes would get a chance at a Hollywood version for many years to follow.

So this brings us back to our original question:  Is the new Doctor Strange film an opportunity to widen the MCU and reintroduce fans to Ghost Rider, Blade, and friends once again?  Although the original Midnight Sons were brought together primarily by both the Ghost Riders (Blaze and Danny Ketch) to battle “The Mother of Demons” Lilith, it is later revealed that Doctor Strange was the one pulling the strings.  The success of the Doctor Strange movie could go a long way in bringing back established properties to the MCU which the general public has knowledge of (such as Blade and Ghost Rider) while also integrating fan favorites such as Daimon Hellstrom (know to 1970’s comic fans as “The Son of Satan”), Werewolf by Night: Jack Russell, and “The Living Vampire” Morbius.

Another factor in bringing a group like this one to the silver screen may be in the form of Warner Brothers announced slate of D.C. films.  Warner Brothers, unlike Marvel (who took the time to build their cinematic universe slowly and carefully), seem to want to populate the multiplex with as many films based on their characters as humanly possible, in the shortest amount of time.  Whether this proves to be a hasty decision or not, we will have to see, but one particular film on the schedule bears watching: Dark Universe (formerly titled Justice League Dark).    Similar to the Midnight Sons, this collection of heroes consists of those on the supernatural fringe of the DC Universe including such characters as Zatana, John Constantine, Deadman, Etrigan the Demon, etc.  Marvel has not been one to follow trends, but with this film in “development Hell” (Guillermo Del Toro left the project last year, choosing to return to Pacific Rim), they may be able to beat their rival to the punch with their own supernatural team.

Outside of the MCU possibilities, the Midnight Sons may prove to be a successful Netflix concept.  Just as Marvel is building their Netflix programming to culminate in a Defenders event series featuring Daredevil, Jessica Jones, Luke Cage, and Iron Fist, if the network is looking for another “family” of titles to develop, the Midnight Sons would fit this model nicely.  A Netflix series would also allow writers and directors to push the envelope in terms of mature themes, horror, and gore, some of which have already worked effectively in their current Daredevil and Jessica Jones series.  The Netflix programs, like all of the Marvel television series, tie directly into the larger MCU and yet comfortably exist outside of it.  A film like Doctor Strange could open the door in a similar fashion to these series, or more similarly, the way that the Captain America franchise paved the way for Agent Carter on ABC.

The last factor that fans of the “horror heroes” have to thank is the recent mind-boggling box office of the hard-R Deadpool film.   If Hollywood smells money in “adult” super hero properties again, there may be no better place to go than the original R-Rated hero to crack the code: Blade.  A new Blade film could certainly open the door to more characters in the core Midnight Sons group, having already introduced both Drake and Hannibal King (ironically played by Deadpool himself, Ryan Reynolds) in Blade Trinity.  While the earlier Blade films shied away from direct adaptations of some of his supporting characters, the movie-going public is much more accepting and knowledgeable about comic characters in this era.  Twenty years ago, having Ghost Rider appear in a Blade film would be seen as “too much too soon” but the growing trend in super hero team stories would certainly allow for this to happen in today’s day and age.

Whatever the future holds, it is a good time to be a fan of comics and the eventual cinematic interpretations of our beloved characters.  With so much diversity of storytelling and genres being experimented with, it seems inevitable that one day we will get the Marvel horror heroes we deserve.  Until then, get your hands on your old issues or buy them cheap online before The Midnight Sons become the next rising stars of the Marvel Cinematic Universe!

Doctor Strange Strong Out of the Gate with $32.6 Million on First Day of Release - Horror News Network - Complete Coverage of all Things Horror! November 5, 2016 - 3:21 pm

[…] is certainly good news for fans of Marvel’s darker side.  Horror News Network speculated last March that the success of Doctor Strange may open the door to the supernatural realm traditionally found […]

[…] Will the success of Doctor Strange lead to more supernaural corners of the MCU opening up?  Stay tuned to Horror News Network for constant coverage and breaking news on this topic. […]