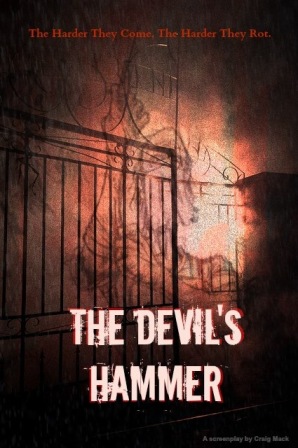 “Trapped in a desolate mining town, an outlaw biker must battle a family of ancient, diseased cultists to save his club and make it back to his family alive.”

I grew up with a bunch of weird friends. They weren’t weird to me, but to the rest of the world we were different. We were fine with it. We listened to loud, angry music. We moshed and stage dove and broke bones (sometimes our own). We watched the strangest movies we could find and laughed at the most awkward parts. We were fine with all of it.

Fast forward two decades and everyone has each gone on to their own successes but recently my friend of close to 30 years, Craig “Mack” Walendziak, not only penned a screenplay for a horror movie titled The Devil’s Hammer, but he went ahead and submitted it to the Hollywood Horrorfest. On top of that, he won. Did I see this as an opportunity to both give credit where it’s due as well as further my career as a horror writer on the coattails of my friend’s success? You bet your ass I did.

On the night that Jimmy Breslow, a soon to be father, and lifelong member of The Devils Hammer Motorcycle Gang is allowed to retire from his former club, the bikers are attacked by local law enforcement hell bent on revenge. The club takes refuge in a desolate mining town only to find that the Sheriff is the least of their worries. Surrounded by disease, Jimmy must fight through unspeakable horrors to save his club and make it back to his family alive.

Per Craig: “Think Sons of Anarchy meets Wrong Turn with a diseased ridden cult on the backside.”

In addition to writing The Devil’s Hammer – and two other feature-length screenplays – Mack’s past consists of playing in multiple touring bands, releasing numerous albums and EPs, and promoting shows for local and national touring bands throughout the New England area. With a Bachelor’s degree from Harvard, he has been featured on such websites as Seeking Alpha, Morning Star and Yahoo Finance, and is currently working as a consultant in Boston as well as being the editor of www.horrorscript.com.

Congratulations Craig on a well-deserved win. I am personally looking forward to seeing The Devil’s Hammer on the big screen soon.

Members of The Blacklist can read the script at the following: https://www.blcklst.com/members/scripts/view/15743