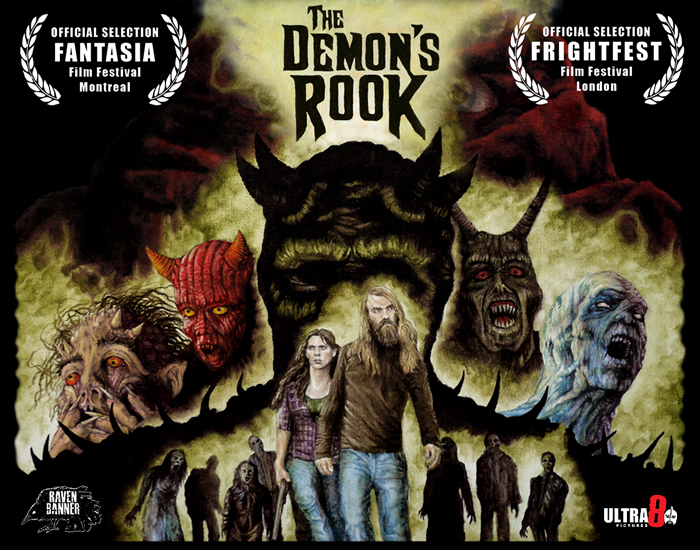 Synopsis: Chaos descends upon a quiet town when Roscoe, the pupil of a wizard monk from an ancient race of demons, unknowingly opens a portal that allows an unspeakable evil to travel freely into our world. When three grisly beasts cross into our dimension, the living are possessed and the dead rise to destroy everything in their path. Armed with demons’ magic, Roscoe is the only fighting chance to put an end to their eternal path of destruction.

Our Thoughts: Using amazing practical effects, The Demon’s Rook is a refreshingly gory homage to 80’s creature-features. Essentially, this film is a fantasy tinged, blood bath of demons possessing humans, resurrecting the dead, and wreaking havoc upon a small town.

First we are introduced to Roscoe, a boy who, adept at drawing, is repeatedly visited by a demon during night, and his best friend Eva. One night the demon, whom he refers to as Dimwos, kills his parents and leads him down into a smoky, glowing red hole in the ground.

The film skips to years later, when Roscoe, now an adult, with a bushy beard, long hair, and little clothing, crawling out of that same hole in the earth. He then proceeds to wander around his old hometown. Eventually Roscoe reunites with his childhood friend Eva, whose father had just been killed by demons. Using “powers” endowed upon him by Dimwos, Roscoe shows her what had happened to him in a vision. Apparently, Roscoe was taken all those years ago by Dimwos.  Dimwos, part of an ancient race of demons who protect the universe, tells Roscoe he that he is one of them and he is passing on his magic to him so that one day he will take his place as protector of the vessels. When Roscoe remembers what had happened to him as a child, that Dimwos had killed his parents, he is enraged, turning against his teacher, accidentally destroying the vessels with his magic, and unleashing the evil they were trying to keep locked away. Roscoe flees to the surface of the earth, the only place he has left to go.

Initially Eva blames him for her father’s death and unleashing this evil on the world, however she has no choice except to join Roscoe in his fight against the demons. They fight for their lives, as people in the town are killed, possessed, or possessed and killed. Blood, flesh tearing, and lots of gore make for an entertaining climax to a very enjoyable gorefest!

Actor, director and writer James Sizemore is great as demon apprentice Roscoe. His wife, Ashleigh Jo Sizemore, is equally believable as his partner in fighting evil, Eva. The film score really adds a surreal effect to this small film, almost becoming a character in itself, however, the practical effects steal the show with amazing looking demons, zombies and gore! There’s a touch of fantasy mixed in as well as well, with mysticism, magic and otherworldly scenes. The Demons’ Rook is a must-see for gore fans!