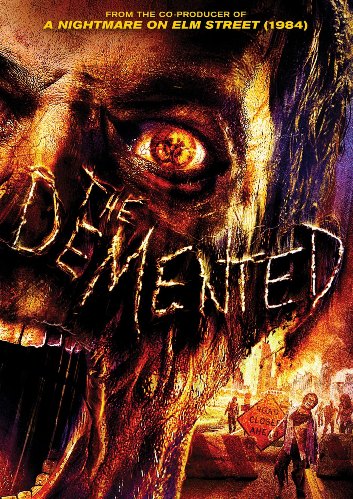 It seems as though it’s still a somewhat common practice to lump infection movies in with zombie movies. Even taking into consideration those who consider zombies the result of a virus of some sort, there will always remain one glaring difference between an infection and the zombie apocalypse: zombies have to die and reanimate whereas the infected are still alive. This frees the makers of infection movies from the constraints of typical zombie mythology and allows them to create something new with their own flavor of depravity. The Demented steps up to the plate and handles this challenge relatively well.

We’re informed during the opening credits that the locale is Baton Rouge, Louisiana. The film opens with Taylor arriving at the home of her boyfriend David. David has her get out of the car so he can talk to her and in the process gives her a promise ring. Awww. Soon after, Brice and Naomi show up and the two couples take off for a weekend getaway. The viewer is then treated to a montage of their rather enjoyable road trip. I’ll admit it, I enjoy when a movie gives you an initial impression of its characters having a good time when you know full well that their worlds (and probably their bodies) are about to be shredded.

Eventually they come to their destination: a beautiful rural mansion owned by the father of their friend Howard. Howard and his girlfriend Sharley are there and we get further evidence of how good-natured and fun this weekend is supposed to be. While the others sit outside making plans for the next day, David heads inside for a beer run. He answers a phone call which turns out to be from Howard’s father, who informs him that there has been a rogue terrorist attack on the east coast.

What’s worse is that there are also missiles heading toward the gulf coast, which is somewhat near where the group is staying. Howard’s father tells them to stay put, which they ultimately decide to do. While the rest of the group sits inside discussing the capabilities of radio-controlled ballistic missiles, Taylor decides to go outside to get some air – only to see a missile streaking across the sky, exploding in the distance, followed by two fighter jets. Sharley speaks with her mother and discovers that one missile was shot down and the other self-exploded over New Orleans.

After some minor dialogue about their respective romantic relationships, Sharley and Taylor notice a dog standing off in the distance. They’re extremely cautious as the dog appears to be rather sick. The rest of the group join them but as they begin to slowly retreat into the house the dog charges and attacks, launching itself at the door just as it slams in its face. Howard decides to just lock up the house and everyone stays inside for the night.

Later that night, Taylor can still hear the dog growling outside but David just tells her to get some sleep, which she eventually does. The next morning though, Brice and Naomi see the dog standing in the same spot it was in the day before. Brice decides to take matters into his own hands and, using a bat Howard gives him, heads outside and eventually dispatches the dog when it attacks. David feels bad and wants to bring the dog to animal control.

While driving with the dog, David listens to radio broadcasts about the local area being under quarantine due to a biological attack. He eventually happens upon a crashed El Camino, whose occupant is standing next to it, eerily still. When David asks if she needs help, she turns toward him, mimicking the same erratic movements of the dead dog now lying in his car. As she rips a giant clump of hair out of her own scalp, David comes to the wise conclusion that it might just be a good time to get going. He throws the Jeep into reverse and begins peeling away just as she lands on the hood. Throwing the emergency brake spins the car 180 degrees and sends the woman sailing off and eventually skidding across the grass. This scene was awesome! No sooner does David get back to the house and explain what he’s heard and seen do the others begin to experience first-hand exactly what is going on around them.

Outside of the effects being a bit cheesy in some places, this wasn’t a bad movie. The acting was what really drove it home. We watch the main characters transform from a fun-loving group to survivalists and it’s actually believable. Additionally, credit must be given to all of the “infected” actors. Yes, I know, it doesn’t take much to act like you’re a bloodthirsty, virus-laden maniac, but in The Demented, the virus is a bit different (without giving too much away), and whether it’s simply good direction or just a bunch of well-trained extras, someone deserves a gold star for the day.

I liked The Demented. It would be interesting to see a sequel by the same people with a bit bigger of a budget.