‘The Deeper You Dig’: The Horror News Network Review

How deep will you dig to hide your nasty little secret? The Deeper You Dig is a family affair, not just in context of the story with Ivy and Echo as mother and daughter but also in that the three main characters are played by a husband/wife/daughter team that also wrote, directed, produced and scored the film. The family business is called Wonder Wheel Productions and they’ve been making their own films since 2013’s Knuckle Jack which also starred the husband/wife/daughter team of John Adams, Toby Poser and Zelda Adams. Another daughter, Lulu Adams, is also often involved in the acting, camera, sound and AD roles of Wonder Wheel’s productions – what a family!

The Deeper You Dig picks up with Ivy (Toby Poser) picking up her teen daughter Echo (Zelda Adams) at school. It’s easy to tell that the two have a good relationship. Both are a bit quirky – Ivy is a “fortune teller for hire” and Echo is the town goth kid – but they get along quite well which isn’t always the case between a teen and her mom; perhaps the strength of their relationship comes from the absence of a father in the home?

On the way home, the two discuss the oncoming snowstorm and Ivy lets Echo know that she has to work that night, so she’ll be on her own, probably a common occurrence in her line of work. We’re then introduced to Kurt (John Adams) who is having dinner and drinks at a small dive bar. The look he gets from the bartender when he asks for another shot and a beer is all we need to see to realize that he’s probably had too much booze to be climbing into the driver’s seat of his pickup truck…let alone at night in a snowstorm.

While Kurt is driving and doing the ol’ one-eye-closed trick, his headlights catch a few fawns crossing the road and bouncing into the woods. As he’s happily watching them run off into the brush, and not paying attention to the road, he feels a hard bump under his truck and immediately stops. Grabbing a flashlight, he makes his way to the back to the road to try and find what he figures will be an injured deer; instead he finds Echo who unfortunately decided that it was a good night for a sled ride.

This moment is the beginning of a lot of bad decisions for Kurt. He doesn’t know anyone in town, he’s only there because he purchased a beaten-up old home next door to Ivy and Echo with the intentions of fixing it up and flipping it. It’s not clear if Kurt is a good guy or not – we get the feeling that he’s sort of neutral…but when you add too much booze, the dark side flows through him in a series of poor mistakes.

When Ivy returns from her job to find that Echo is not there, she immediately gets on the phone with authorities to report her as missing, completely dismissing the police’s suggestion that she may have run away; as I said, they have a good relationship.  While Ivy is plastering the town with posters about Echo, Kurt continues to work on the house and is visited by the police. Although he’s acting shady AF, he does enough to get the detectives off his back but in the meantime, it turns out that Ivy may not have been a “fake psychic” after all; she begins have visions and certain “realizations” about Echo’s disappearance and Kurt’s place in it.

What follows is a lot of oddly surreal, dream-like imagery for Ivy and Kurt as Ivy immerses herself into her otherworldly gifts (and curses) in order to figure out the truth behind what happened to her beloved daughter.

The beauty of The Deeper You Dig lies in the brilliant performances of the three protagonists and the family’s abilities to make the absolute most of the incredible winter scenery as the perfect backdrop to loss, madness and grief. The imagery provokes a visceral reaction, the paranormal themes are well done, and the scares are accentuated by the superbly eerie score by John Adams (Kurt). Also, I’d be remiss not to mention that Zelda Adams (Echo) is a star – I look forward to seeing her grow as an actor (and behind the camera) in future projects.

The Deeper You Dig will be on my list of Top Films of 2020 at the end of this screwed up year. 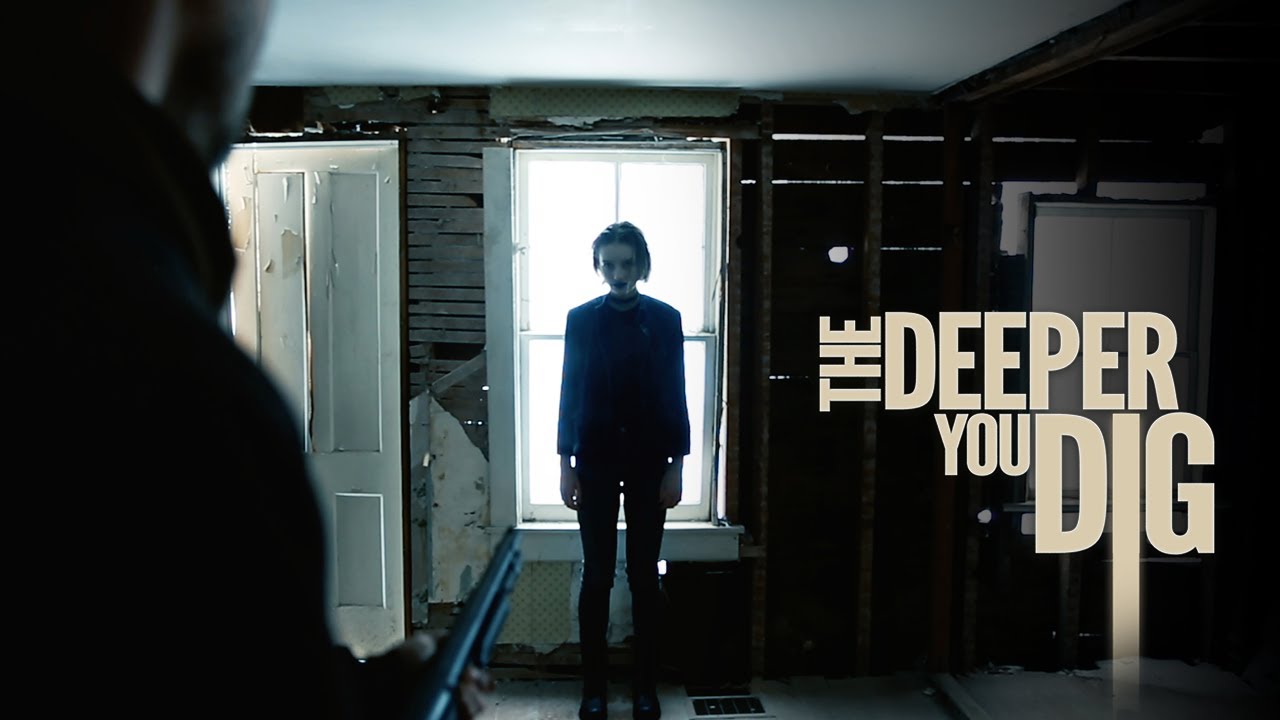