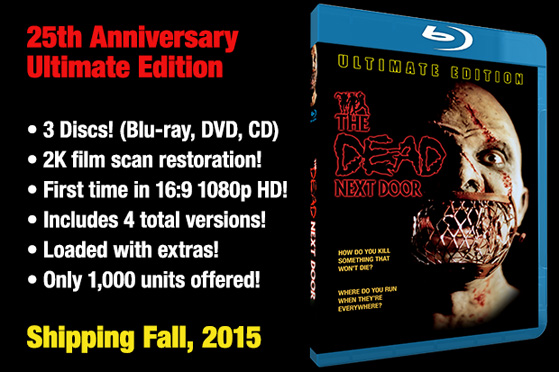 TEMPE TAPS INDIEGOGO FOR “THE DEAD NEXT DOOR” 3-DISC

30 years ago this fall, writer/director J.R. Bookwalter (“Ozone,” “Witchouse 2: Blood Coven”) embarked on “The Dead Next Door,” a gory, ambitious Super-8mm horror feature that pits an elite team of Zombie Squad soldiers against hoards of the undead and the secretive religious cult hell-bent on protecting them. The film would ultimately take four years to complete with the help of more than 1,500 Northeast Ohio residents portraying the multitudes of bloodthirsty zombies.

For this one-of-a-kind release, Tempe has assembled four unrated versions of the film, two of which have been created from a brand-new 2K restoration using the original film elements. To celebrate the film’s 25th release anniversary this fall, collectors and fans will now be able to enjoy the movie in 1080p HD in either 4:3 original aspect ratio or 16:9 cropped alongside the standard-definition masters used for previous VHS and DVD releases, together with all of the commentary tracks and extras from with those versions.