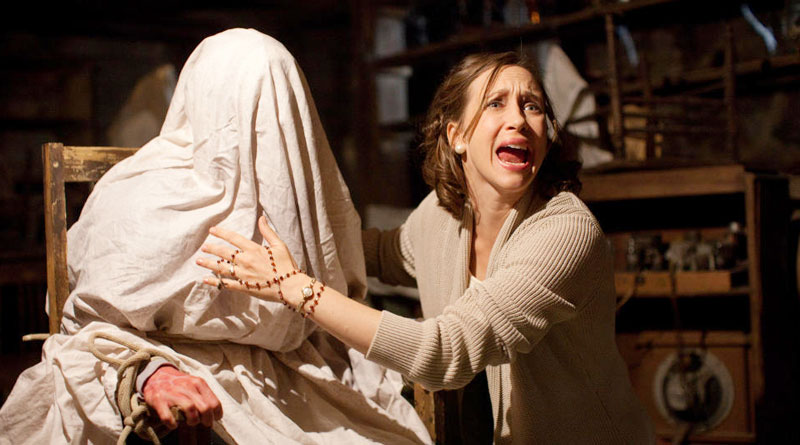 The question I’ve been asked a bunch of times already by those who know that I’ve seen The Conjuring is, “Is it scary?” To answer that question, I reply, “Well, it’s not often that a grown man comes home to a dark house after seeing a scary movie and feels the need to immediately turn on all the lights.” So yeah, the movie is scary…in fact, it’s one of the scariest movies I’ve seen in a long time.

Based on a true case, the setting is the early 1970’s and among the earlier scenes of the movie, we see Ed and Lorraine Warren (played by Patrick Wilson and Vera Farmiga) discussing the famous Annabelle doll that you have probably heard of if you are familiar with their work. We also see them giving a lecture and showing video of an exorcism to a group of scared-looking folks in an auditorium. Director James Wan is setting the audience up here, he’s letting us know that there is a strong demonic presence in the world and we’re all about to get a taste of it.

Next we’re introduced to the Perron family. Husband/father Roger (played by Ron Livingston of “Office Space” fame), wife/mother Carolyn (played by one of my faves, Lili Taylor) and their five daughters (played by a whole bunch of kids). They seem like a super-nice young family which makes what’s going to happen even worse. Roger and Carolyn just want to raise their children in a quiet country setting and they apparently get a great deal on this old Rhode Island house.

Right from the start, we’re shown that there’s something not kosher about this house. One of the daughters accidently finds a boarded up wall in a closet that leads down to a secret basement (never a good sign). All of the clocks all seem to stop at 3:07am. There are random bangings on the walls and doors are closing by themselves. Carolyn wakes up with new bruises every morning and one of her daughters is being pawed at in her sleep. And this is just the beginning.

When things really start to go south, Carolyn finds her way to another of the Warrens lectures (this one with the actual Lorraine Warren in attendance) and she approaches them afterward to ask for their help. The Warrens decide to take a drive out to the house to see if there is really anything wrong and it’s not long before they’re convinced that the Perron family really needs their help.

All of the actors in this film do a fantastic job of portraying the increasing fear that their characters are living through and director James Wan does an amazing job of building an almost overwhelming sense of dread throughout the entire film. Without being any sort of a rip-off, “The Conjuring” is a perfect mix of “Amityville Horror, “Poltergeist” and “The Exorcist”.

As a Connecticut native, it was personally cool to me to see a movie that portrays the Warrens and the work that they have done. I grew up going to their lectures and speaking with them about their investigations as well as sharing pictures with them that I had taken at haunted sites like Dudleytown and Easton Cemetery.

Whether you’re familiar with The Warrens or not, this movie will scare the shit out of you…and that’s a rare thing in movies these days.