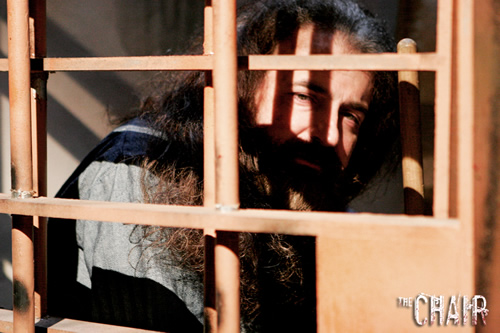 Film production on the Alterna Comics graphic novel adaptation came to a close on February 24th, as the death row horror thriller takes the first steps into post-production.

Directed by Chad Ferrin and featuring an ensemble cast which stars Bill Oberst Jr., Tim Muskatell, Noah Hathaway, Zach Galligan, Naomi Grossman, Roddy Piper, Ezra Buzzington and many more – THE CHAIR centers around Richard Sullivan, an innocent man on death row who witnesses the murders of his fellow inmates at the hands of the psychotic Warden. To survive, he must match the brutality in the prison, but in doing so he’s forced to come face to face with his own sanity and his own horrific past.

A successful crowd-funding campaign on Kickstarter helped to provide pre-production and development costs. Another campaign, this time on Indiegogo, has been planned for mid-April as funds will be raised for post-production costs. An “all or nothing” fund-raising model will be used as opposed to Indiegogo’s traditional method of real-time funding.  More details to come as the launch date draws near.