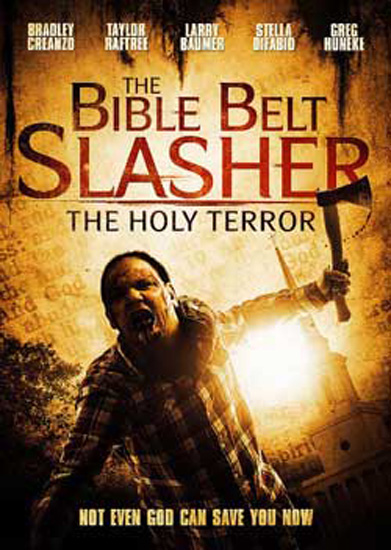 Synopsis: It’s December 1989, and Wilkins, Tennessee native Jason Fry returns to wreak more havoc on the survivors, friends and families of the teenagers whom he killed in the first film. Fry is committed back to the Hillside Sanitarium for his brutal crimes, but he doesn’t stay there long. Fry kills his doctor and escapes going on a bloodbath crusade of revenge against those he believes to be sinners in his eyes. Only Dr. Landers knows what Fry is and he will do anything in his power to stop him, but will he save everyone from the holy terror that Fry brings this Christmas season?

Our Thoughts: I went into ‘The Bible Belt Slasher Pt II: The Holy Terror’ not having seen the first film, so I didn’t entirely know what to expect. What appears at first to be a low budget horror with a lot of overacting, turns into a gory, fun homage to the 1980’s that I really enjoyed.

With a plot similar to ‘Halloween 2’, the story centers around a killer who escapes again when being sent back to a sanitarium for crimes he committed in the first film. He returns to his killing spree against those he believes “sinners” on Christmas Eve. His doctor is the only one can stop him, or thinks he can.

Psychotic killer Jason Fry is influenced by a mix of killers and characters. He looks a bit like John Wayne Gacy, acts a little like Freddy with his cheesy jokes, is in a situation similar to that of Michael Myers having escaped a sanitarium, along with the fact that his name is Jason. However, his constant drooling and menacing laughter distinguishes him from the others and makes him a memorable character.

The filmmakers were clearly huge fans of 80’s horror and successfully brought back that 80’s vibe to the film. More than anything, I came away feeling nostalgic after watching the film. The soundtrack more than anything sets the tone for the film. Video tapes, boom boxes and big hair make prominent appearances. The music video in the middle of the film was a pretty cool addition to the film, and they really went the extra mile to bring the viewers back to the 80’s. It has as self awareness that 80’s film don’t have and even makes some references to the future. The practical effects were effect and clearly influenced by old school slashers. Reminiscent of an even lower budget ‘House of the Devil’, the film lacks a bit in the way of acting talent. However, the extreme performance by Larry Baumer, who plays Jason Fry, was amusing to watch. Despite it’s flaws, or maybe even because of them, ‘The Bible Belt Slasher Pt II: The Holy Terror’ is a fun, amusing, and enjoyable homage to 1980’s slasher flicks. After seeing it, I want to go back and see the first one, and I honestly hope the filmmakers make another sequel.