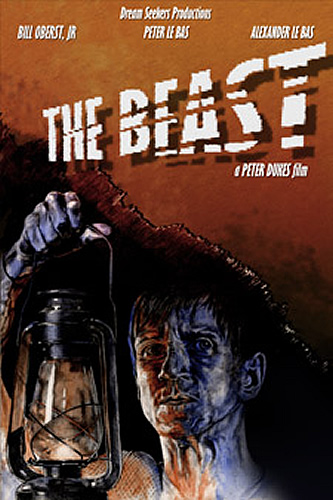 Synopsis: THE BEAST, starring rising horror icon Bill Oberst, Jr., is the story
of a father who struggles with how to handle his only boy, who’s been afflicted
with the curse of the werewolf.

Would you kill someone you loved in order to set them free? This scenario has almost
lost its luster considering that every film these days wants to play with this grim
dilemma. However, independent film-maker Peter Dukes has decided to give this popular
plot another go.

“The Beast” is a horror short which shows a man’s struggle to keep his son alive, despite his affliction and the rising body count. In the dark of the woods under a full moon, the laden father (played by Bill Oberst, Jr.) recruits the help of his brother to restrain his adolescent son, Jacob. The father ties Jacob to the tree as the Uncle insists that Jacob must be killed before he hurts anyone else. By this time it’s safe to assume that Jacob is about to turn into a Werewolf. After much debate, the uncle walks away and JacobÃ¢â‚¬â„¢s father unties him. This is when matters really escalate.

Being a lover of independent films, I have to say I do enjoy the style Peter Dukes has chosen for this short film. It’s simple, it’s dark and it gives you an eerie sense of impending doom. Bill Oberst does a fantastic job as JacobÃ¢â‚¬â„¢s father. You find yourself feeling truly empathetic for him and his anguish, as well as, for Jacob as he slowly loses control of himself.

Dukes has taken a frequently used plot and breathed a bit of new life into over a time-span of 12 minutes, and the twist at the end will leave you wanting more. This is a short that I would recommend to any independent horror fan.