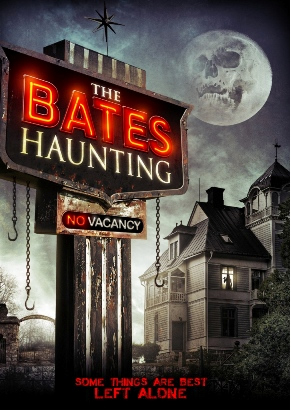 The Bates Haunting Coming to DVD on August 6th

Uncork’d Entertainment proudly announces the multi-platform release of Byron Turk’s (Storm Chasers, Flipping Boston) The Bates Haunting, dubbed by the director as “Scream meets Scooby Doo”. The indie thriller was shot in rural Pennsylvania, at Arasapha Farm’s original Bates Motel and Haunted Hayride: one of America’s top Halloween attractions. The Bates Haunting will be available August 6 for rental and digital, and available for sale on DVD a few months later.

“I’m a huge fan of the many Haunted House attractions around the country,” commented Uncork’d Entertainment’s Keith Leopard. “When I saw The Bates Haunting and discovered that it was actually filmed at a real haunted house and hayride in Pennsylvania, I wanted to be a part of getting this film out to the public. I think everyone will enjoy this movie as it reminds me of the fun horror films I saw in the theaters growing up before the advent of home video.”

Agnes Rickover (Jean Louise O’Sullivan, Valley Peaks, Bullrun) visited the Bates Motel and Haunted Hayride looking for some Halloween fear and fun. Instead, she witnessed a tragedy: the fiery death of her best friend Lily making her dramatic debut on the Hayride. After a year spent obsessing over the horrible accident, Agnes takes a job at The Haunted Hayride, hoping to face her trauma and to exorcise her demons. She thinks this could be an investigative opportunity as well, and when her new co-workers end up victims of mysterious accidents, she knows it is. With her new sidekick Clyde, Agnes must figure out whom – or what – is behind all of this mayhem before more people die.

The film co-stars Zachary Fletcher in his debut starring role as Junior Bates and the late Ryan Dunn. Featuring a wild cast of characters ranging from ghouls and goblins to an overzealous chainsaw wielding theater actor, The Bates Haunting is part haunt, part hunt, full of spirits and the spirited! Agnes and Clyde are facing certain death – their only escape route through a crowd of entertained customers who think it’s just a show, but for them it’s a scary, shocking showdown!