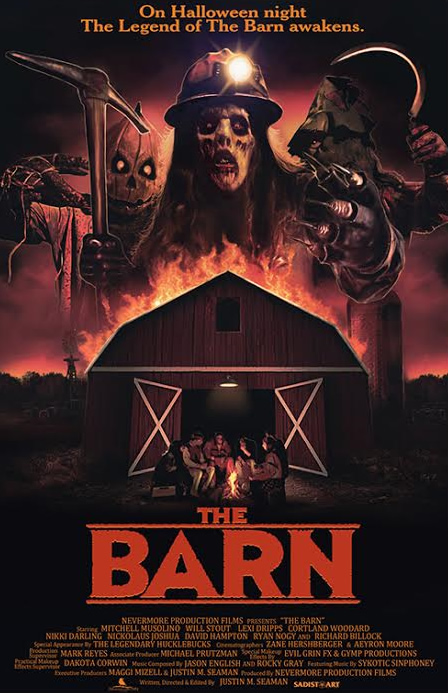 From writer-director Justin M. Seaman, THE BARN is a new film created to give fans of 1980s horror a bloody good time.

On Halloween night in 1989, best friends Sam and Josh are trying to enjoy what’s left of their final All Hallow’s Eve before graduating high school. However, diabolical trouble arises when they and their friends take a detour on the way to a rock concert. After finding an old abandoned barn and awakening the evil inside, it’s up to Sam and Josh to find a way to protect the group by defeating the demonic creatures that lurk within THE BARN. The film stars Mitchell Musolino, Will Stout, Lexi Dripps, Cortland Woodard, Nikki Darling and Nickolaus Joshua.

“Being born in the 80’s I’ve always found myself attracted to the nostalgia of horror films from that time period,” says Seaman “There was nothing better than strolling among the aisles of the video store in search of a fun and entertaining monster flick.”

Nevermore Production Films has gained attention through its successful series of promotional avenues, such as the retro-style poster by Sadist Art Design’s Marc Schoenbach, an original film score provided by Rocky Gray (former member of the Grammy award- winning rock band Evanescence), and the contributions of Screen Junkies’ Honest Trailers’, Jon Bailey, who provides the voice-over track for the official trailer.

Additionally, the film’s 1980’s style marketing merchandise consists of action figures, T-shirts, a motion picture soundtrack featuring various artists from all over the world, and a board game with art provided by Horror Hound/Scream Factory artist Nathan Thomas Milliner.

THE BARN is scheduled to premiere in Pittsburgh in October of 2015.