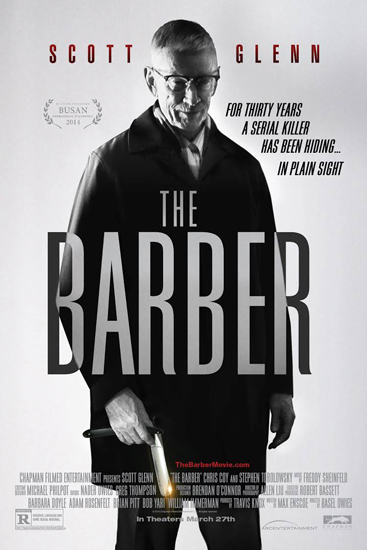 Synopsis: A suspected serial killer terrorizes the Chicago area in the late 90s with murders of young women. Police detective Thomas McCormack finally gets a break in his investigation with the arrest of suspect Francis Visser, but without sufficient evidence to hold him Visser gets released, prompting McCormack to take his life over the despair of his inability to solve the case. Twenty years later, McCormack’s son John sets out to bring the case to resolution in a completely unexpected manner.

Our Thoughts:  ‘The Barber’ is a mysterious thriller that pulls you in from frame one. Twenty years after being arrested for several murders and released due to lack of evidence, a serial killer is posing as a barber in a small town. John McCormack, the son of the lead detective on the case who committed suicide, tracks him down. He claims to be his biggest fan and wants to learn the tricks of the trade, but is he actually seeking revenge? What is his plan?

Once you think you’ve got it figured out, it leads you down another path. Lies on top of lies, it’s hard to tell what the truth is or where the story is really going. It results in an interesting story with an unexpected ending. For a thriller, the film is somewhat subdued in it’s approach to telling the story and feels like more of a drama with gruesome subject matter. Despite an interesting storyline and a fairly slick production, the film doesn’t have the intensity I feel it was striving for.

Scott Glenn (The Silence of the Lambs, Daredevil), who plays Eugene Van Wingerdt is an extremely creepy aging serial killer.  Chris Coy (The Walking Dead, Deliver Us From Evil) who plays John McCormack gives a very good performance as the son living with his father’s demons. Fans of either will want to check out ‘The Barber’, as will fans of serial killer centered horror.