There are some horror stories–whether a novel, a movie or a comic book–that must be experienced more than once to be truly appreciated.

Such is the case with The Autumnal No. 1, a new release from Vault Comics. The graphic novel–obviously inspired by several genre masters–is gripping and disturbing. And it’s only the first taste of a much larger, more complex story yet to unfold.

The creative team takes a very patient, thoughtful approach to the tale, giving the reader just enough of the backstory of the mother-daughter protagonist duo to lead smoothly into the horror to come. And it’s a subtle horror–at least in this first issue.

The story–courtesy of writer Daniel Kraus (The Living Dead), artist Chris Shehan, colorist Jason Wordie (whose poignant hues add so much to the final product) and letterer Jim Campbell (top-flight letters throughout)–has a very cinematic feel to it. The reader experiences the story, as much as reads it.

The Autumnal, at its essence, is the sad and all-too-familiar story of a young mother, Kat Somerville, and her daughter Sybil as they leave their hard life in Chicago–it is intimated in a wonderfully frightening sequence that Kat has suffered through an abusive relationship–for the quaint town of Comfort Notch, N.H., Kat’s hometown.

Kraus and Shehan blend words and pictures seamlessly as they take the reader through the news of the death of Kat’s mother Trudy–a woman with whom Kat has had a tumultuous relationship–to their bus ride to Comfort Notch to attend a funeral neither really wants to experience.

Along the way, the reader learns more about the strong bond between the hard-living former band member of a mother and her strong-willed, independent daughter. You also learn that Comfort Notch–“Home of America’s Prettiest Autumn”–is the place Kat was sent away from at age nine by her mother. A serious bone of contention that Kat still struggles with now.

It isn’t until you are well into the story that the underlying horror that lives in Comfort Notch is hinted at. As in so many of Stephen King’s novels, the town’s darkness is only glimpsed through seemingly innocent images: In this case, through autumn leaves.

When Kat and Sybil ask for directions to the local funeral home, a man raking leaves points them on their way, but not before showing concern–bordering on outright fear–concerning the death of Kat’s mother. No words are spoken, but Shehan’s artwork (which brings to mind some of Frank Miller’s best illustrations) conveys the menace. In fact, Shehan’s placement of golden autumn leaves at the edges of many of the panels tells its own subliminal story.

And, to risk being a spoiler here, the final caption that reveals the corpse of Kat’s mother in her coffin is a chilling omen of the horrors sure to come in the second issue.

The Autumnal No. 1–with a price tag of $3.99–will be available at your local comics shop Sept. 23. It would be a good idea to get in on the ground floor of this stirring slice of small town terror–before it’s adapted into the next big-screen blockbuster.

This graphic novel is that good. You’ll never look at another pile of red-and-gold autumn leaves the same way again.

Keep reading Horror News Network for more reviews and news of all things horror as we head into everyone’s favorite scary season. 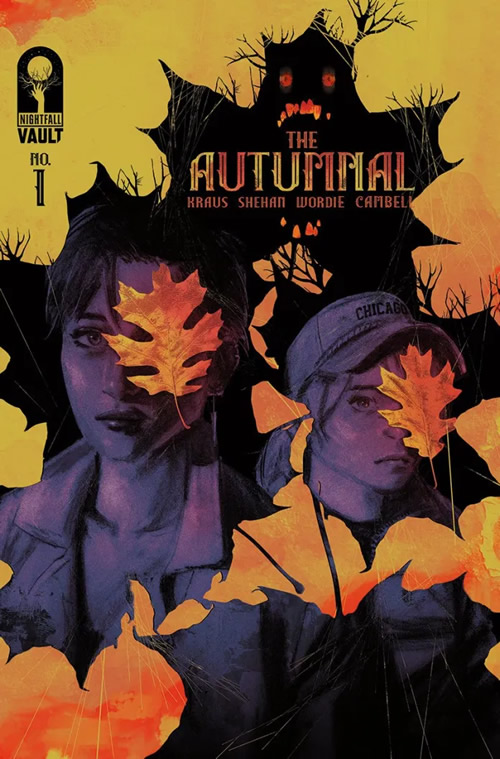