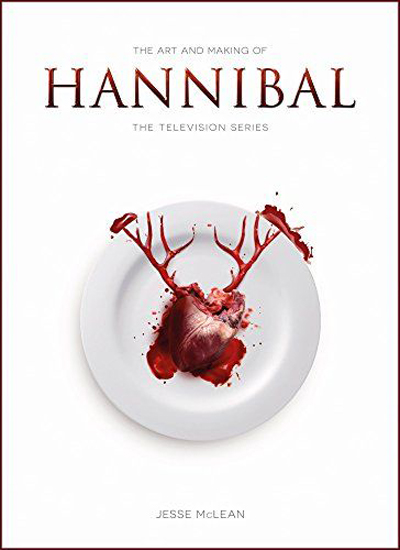 ‘The Art and Making of Hannibal: The Television Series’ – Review

‘The Art and Making of Hannibal: The Television Series’ – Review

Synopsis: The Art & Making of Hannibal: The Television Series is a detailed look at the making of this highly original, critically lauded, and visually stunning series. Released ahead of the start of the 3rd season, this book will bring Fannibals into the world of secrets, lies, and intrigue of their beloved show.

With stars including Mads Mikkelsen, Hugh Dancy, Laurence Fishburne, Caroline Dhavernas and guest spots by Gillian Anderson, Eddie Izzard and Michael Pitt, Hannibal is one of the most elegant, engrossing and deliciously haunting shows on television today. The Art & Making of Hannibal: The Television Series celebrates all aspects of this unique show. A highly stylized illustrated book featuring extracts of the shooting scripts of the first and second seasons, exclusive cast and crew interviews, behind-the-scenes photography, production notes, storyboards, alongside Hannibal’s sketches and music notations.

Hannibal Lecter was a brilliant psychiatrist in the employ of the FBI. His task: to help an unusually gifted criminal profiler, Will Graham, who is haunted by his ability to see into the minds of serial killers.

Our thoughts: ‘The Art and Making of Hannibal: The Television Series’ is a book as beautifully executed as the series itself. It’s an illustrated Art and Making of book, with high quality, behind-the-scenes photos and sketches, along with eloquently written descriptions of the inspiration behind various elements of the show.

‘The Art and Making of Hannibal’ essentially covers every creative aspect of the show you can think of. From murder scenes, to Lecter’s kitchen and cooking, and detailed look at the characters. Locations, such as Lecter’s office, are given detailed attention, in addition to the wardrobes and personal aesthetics of each character.

Anyone watching the show, knows that ‘Hannibal’ is a very artistic, stylized show. The book takes the aesthetic of the series and gives it words, explaining where the inspiration for various concepts and scenes in the show came from. Interviews with cast and crew are also included.

The book is set up in true fashion of the series, with titles for each section in the same food-inspired style in which the episodes are titled. The foreword, or ‘Apéritif’ is by Martha De Laurentiis, followed by the ‘Entrée’, which is a section on how the Hannibal series came into existence. The bulk of the book is ‘The Main Course’, which includes three large sections; one for Hannibal, one for Will Graham and one for Jack Crawford. Which leads to the ‘Sorbet’, which is a ‘Dissection of a Murder Scene: Human Totem Pole’. It closes with a ‘Desert’ of finishing touches that covers editing and music. An author acknowledgments, or ‘Digestif’ in this case, follows.

As someone who collects Art and Making of Books, I can honestly say this is one of the best ones I have read. The only thing that could make this book better is a hard cover. Otherwise it is absolutely everything I would want from an art book about NBC’s ‘Hannibal’. ‘The Art and Making of Hannibal: The Television Series’ is required reading for all true Fannibals and I highly recommend it.

You can purchase your copy at the NBC ‘Hannibal’ Store here.