The upcoming reboot–Texas Chainsaw Massacre–will pick up years after the original, with Leatherface in hiding and “trying to be a good person.” How long that lasts will be seen Feb. 18, 2022 on Netflix.

The History of Texas Chainsaw Massacre
When wide-released on October 11, 1974, The Texas Chainsaw Massacre set a whole new bar, not only for filmmaking but for the entire horror genre; especially with its marketing campaign about the film being based on “a true story.” Set in hot rural Texas, the story saw five friends embarking on an adventure that took them straight into hell. One by one, Leatherface claimed his victims: using a mallet, a meat hook and the titular chainsaw. The lone survivor, Sally Hardesty, escaped on the back of a truck just in time before Leatherface could catch her. As she was driven off to safety, Leatherface in a fit of rage swung his chainsaw around as the sun set behind him. 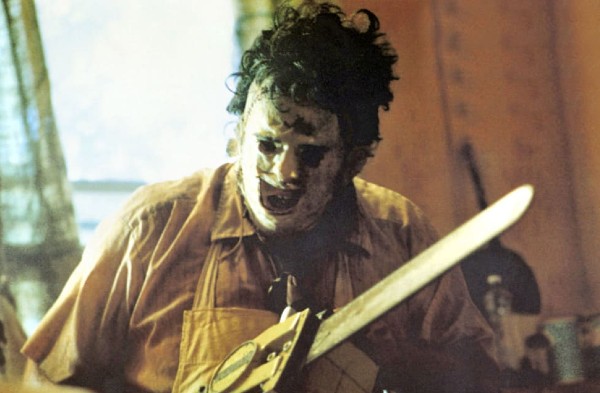 Director Tobe Hooper came up with the idea of a villain using a chainsaw to mow people down while shopping in a department store during a Christmas rush and he saw how overzealous the shoppers were acting. He claims to have seen the shelves with chainsaws for sale and thought that one of them would clear them out of the way very quickly. The idea of Leatherface wearing outfits made of human skin was inspired by real-life serial killer Ed Gein. Gein had done terrible acts around the area where he lived in Plainfield, WI that gained notoriety in 1957 when authorities discovered that he exhumed corpses from local graveyards and fashioned trophies and made outfits from their skin and bones.

The film was made on a very slim production budget of approximately $140,000 and as such Hooper had to use what was available to him in terms of props and sound effects. Filmed during the long and enduring summer heat of Texas, actor Edwin Neal, who played The Hitchhiker, said his experience on the film was comparable to his time in Vietnam as he had to wear the same bloodstained clothes during the duration of filming. A few unfortunate mishaps occurred on set like when actress Marilyn Burns was cut on her finger in the scene when the villains feed her blood to Grandpa Sawyer (John Dugan) and another incident was when filming the scene when actor Gunnar Hansen drops the chainsaw on his leg it, it almost cut through the piece of iron that was protecting his skin under his pants.

In an odd turn of events, upon completion of production Hooper was unable to find a distributor for the film until Bryanston Pictures opted for the rights. The company then turned out to be a front for the Columbo crime family who actually lied about the box office return of the film claiming it only made $1 million in profits when it had actually made about $12 million. Not until 1983 when New Line Cinemas acquired the rights to “TCM” did all the cast and crew make money for their work on it.

The Texas Chainsaw Massacre is an independent horror film that created a whole new kind of villain and managed to launch a historic franchise in the form of sequels, video games, comic books, action figures and assorted merchandise that has spanned the last 45 years.

Texas Chainsaw Massacre Sequels
The Texas Chainsaw Massacre 2 (1986): Released twelve years later, the first sequel brought back Leatherface, now played by Bill Johnson, and introduced audiences to Chop Top (Bill Moseley) as a new villain who terrorizes radio D.J. Vanita “Stretch” Brock (Caroline Williams). They are hunted down by Lt. Boude “Lefty” Enright (Dennis Hopper), the uncle of Sally and her brother Franklin Hardesty from the first film. Enright is out for blood and stops at nothing to bring down the Sawyers. In contrast to the original TCM, the sequel is more of a comedy with many one-liners from Chop Top and Leatherface doing the “chainsaw dance” as more of a parody than a taunt this time around. This was also the first time that Leatherface was called by that name, which was a nickname Chop Top gave him. Hooper returned to direct, this time with a budget of $4.5 million and The Cannon Group backing the production of the film. As a means of marketing to a mass audience, the distributors decided on a poster that resembled The Breakfast Club rather than a gruesome one. The black comedy approach was not received well by fans of the original and the sequel only returned $8 million at the box office. 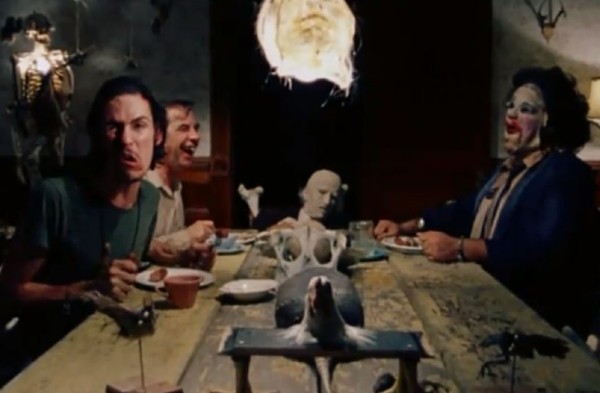 Leatherface: The Texas Chainsaw Massacre III (1990): Despite the lower return of TCM 2, a second sequel was given the green light and distributed by New Line Cinema. The company wanted to bring the TCM series into its fold of horror franchises which already contained A Nightmare on Elm Street and Friday the 13th. For the third film, R.A. Mihailoff played the iconic Leatherface and a new family of Sawyers was introduced as well as a new line of victims. Part III was not received well by audiences or critics and made just $5.7 million at the US box office.

Texas Chainsaw Massacre: The Next Generation (1997): The original line of TCM films ran out of steam with 1997’s entry which brought Matthew McConaughey and Renée Zellwegger into the mix and left everyone quite literally dazed and confused. This time, Henkel returned to write and direct, Leatherface is played by Robert Jacks and involves a whole new cast of characters. After being completed in 1995, the film was finally released in 1997 to extremely negative reviews and the lowest box office return of the entire series at just $185,898. Considering the film was made for $800,000 the loss was not as bad as other lackluster sequels at the time but it sure was a far cry from the success of the original film.

The Texas Chainsaw Massacre (2003): After the turn of the century, New Line Cinemas began producing fresh takes of some of their signature horror hits from previous decades in collaboration with Platinum Dunes, a Michael Bay and Brad Fuller company. This time, a group of wandering teens stumble across a lone hitchhiker who does not attempt to kill them but instead warns them and commits suicide. A film much darker in tone and atmosphere, Leatherface returned, now being portrayed by Andrew Bryniarski, and the hero of the story was Erin (Jessica Biel). Another new character introduced was Charlton “Charlie” Hewitt Jr. (R. Lee Ermey), the fatherly figure of the family who posed as a sheriff named Hoyt to gain the innocent victims’ trust. The film was released on October 17th, 2013 and received mixed reviews but did become the highest grossing film in the series at $107,071,655 on a budget of $9,500,000.

The Texas Chainsaw Massacre: The Beginning (2006): A prequel to the remake was released just three years later, bringing back Bryniarski and Ermey as Leatherface and Sheriff Hoyt respectively. This time, a group of young teens once again happens upon the wretched family’s farm and are torn limb from limb, then worn as outfits. The prequel met unfavorable reviews and earned $51,764,406, which was less than half its immediate predecessor at the worldwide box office.

Texas Chainsaw 3D (2013): Conceived as a late sequel to the original with a title playing on the trend of 3D releases around the time, Texas Chainsaw 3D was a reimagined ending to the original film as it picks up right after Sally Hardesty escapes Leatherface. It then tells the story of a descendent of the Sawyer family named Heather Miller (Alexandra Daddario) who inherits an estate from her late grandmother. It turns out her grandmother was keeping Leatherface, now played by Dan Yaeger, locked in a room down in the mansion’s basement. The film set a franchise record for body count and earned $47.2 million.

Leatherface (2017): A prequel to the entire series, the film was released in 2017 after numerous delays and, because of the delays, Millennium Films lost the rights to the series which landed in the hands of Legendary Entertainment. It was revealed in this entry why Leatherface was really given the name; as a young man named Jackson who suffered from bipolar disorder, he was shot in the face and is forced to wear a leather face covering to keep his jaw properly aligned – above the leather harness he puts on his first skin mask. Due to the release delays the film only grossed $958,650. 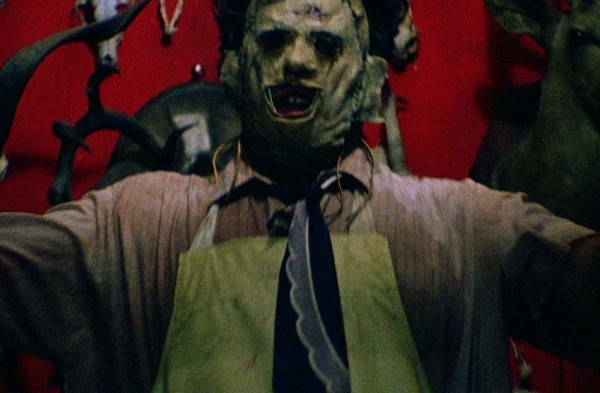 Untitled Reboot (2021): The newest film is said to take place the latest in the series’ timeline, however plot details are being kept under wraps.

The Villain
Leatherface is different from other horror villains who murder in cold blood or to teach a life lesson. Having gone by the names Jedidiah “Bubba” Sawyer and Thomas Hewitt, he was raised in the backwoods of Texas and worked at the slaughterhouse near his family’s farm. He doesn’t speak, but often mumbles or groans in response to his victims or his father’s scolding. He is portrayed as being mentally unstable, living in a family of maniacs that kill and cook innocent travelers who have the unfortunate opportunity to visit their property. His hobbies include cutting the faces off his victims and wearing them like masks. In the original film there were three masks Leatherface wore: the original one we first seen on screen, the “Old Lady” mask when he’s seen with his family and then the “Pretty Woman” mask which is the one he wears during the infamous dinner table scene and while chasing Sally as she escapes. The original film’s Leatherface, Gunnar Hansen, said that fans would call him a liar when he would tell them that The Texas Chainsaw Massacre is not really based on true events as the film states. Sadly, Hansen passed away in November 2015 at the age of 68 but his legacy as a horror icon continues as The Texas Chainsaw Massacre is far from finished.

The first sequel brought down four victims and the entire Sawyer family, including Leatherface, in a turn of events that made this go around bring it to eight.

Because the canon of the films was altered throughout the franchise, Part III told about how Sally from the original film died in a private care facility and Drayton “W.E.” Sawyer, father of Leatherface, was executed in a gas chamber by The State of Texas. For this sequel, there are seven victims on screen, however the character Benny (Ken Foree) survives the theatrical cut but is killed in an alternate ending.

The Next Generation had six confirmed deaths and two fates that are uncertain after an RV rolled over.

For the 2003 remake, the body count finished at eight.

This was followed by 11 in The Beginning.

The game changer was when Texas Chainsaw 3D had 16 on-screen deaths and alluded to three additional ones that happen off screen.

The latest film and highest kill count sits at 20 for 2017’s Leatherface.

Based on these counts, a total of 85 people are killed in the Texas Chainsaw Massacre series, with Leatherface himself claiming 31 of them and the rest being killed by accidents caused by him or died at the hands of other characters.