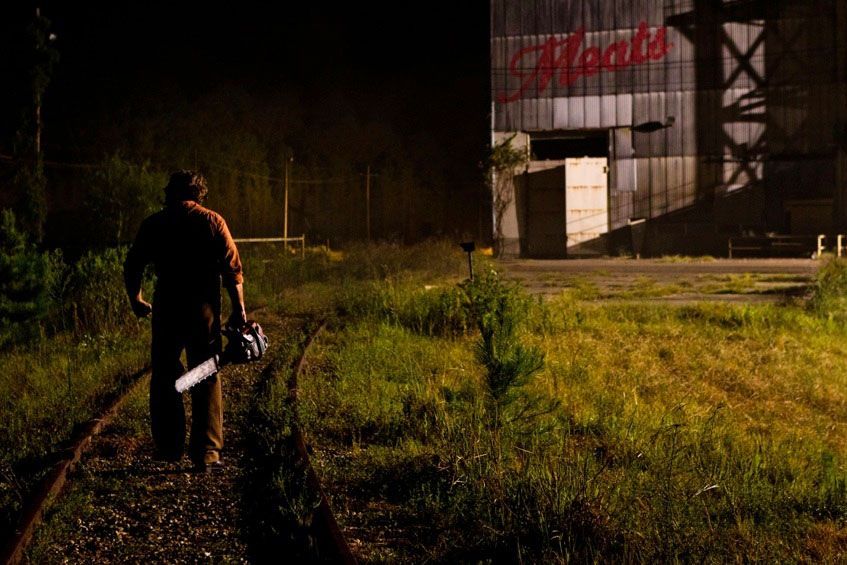 I’m not going to lie. As I walked into the theater, I was expecting this to be another run-of-the-mill chainsaw movie that just happened to also be set in Texas. I was honestly pleasantly surprised though. Now is this the be-all, end-all, best horror movie of all time? No, certainly not. But it was also far from the worst. Let’s put it this way: there were no Illuminati conspiracy theories or former drill-sergeants in this movie. As a matter of fact, what I liked about this movie is that it built solely on the foundation of the original movie and that was it. I’m sure that there will be plenty of hardcore TCM fans out there who would just as soon spit on this movie as opposed to watch it, and that’s fine, but overall the storyline definitely held water: the acting wasn’t sub-par and it didn’t require Matthew McConaughey or his collection of remote controls (my apologies to all women over 40).

The movie begins with a montage of actual clips from the very first movie from 1974. I thought that this was a great touch, personally. I wasn’t quite sure if it was going to be a re-imagining of the original or what, so when I saw the 1970’s footage in brief glimpses it really did put a smile on my face. There was something promising in the idea of knowing what exactly happened AFTER Sally got away in the pickup truck while Leatherface was dancing around in the street next to the big rig.

Well, the answer comes directly after the montage. Deputy Hooper is on his way to the Sawyer place in response to Sally’s escape. Along the way, he passes the big rig, still on the side of the road. Upon arrival at the Sawyer place, Hooper yells to the house, addressing Drayton Sawyer (Bill Moseley), asking him to just send Jed out and the whole thing will be over with (FYI: Jed is Leatherface). One feature I feel is necessary to bring up is that the front door is still in the same mangled state that it was in from the original (“Look what your brother did to the door!”). Small attention to detail such as this will always win brownie points from me.

Inside the house it is eventually decided that they should just give Jed up, but before this can happen a local posse that has formed shows up and they’re out for blood. Then again I guess most posses are typically out for blood unless they’re hanging out with Sir Mix-A-Lot then they’re just on Broadway. But I digress.

A shootout ensues and a few Molotov cocktails make quick work not only of the house but most of its inhabitants. Yes, even Grandpa gets a cameo and gets blasted. There will be no more subtle smiles or swings of the hammer for that old man. Afterwards, while the posse is investigating the area one of the hillbillies finds a woman who is barely alive clinging to an infant. She asks for his help and as he takes the infant into his arms he promises it to her. Then he kicks her in the face which seemingly kills her. He takes the baby to his wife and it is assumed that the two raise the child as their own.

Fast forward a bunch of years. Heather Miller (Alexandra Daddario: who has had a pretty successful TV career thus far, was in the horrid Percy Jackson movie, and is all around gorgeous) is informed by her boyfriend Ryan (Trey Songz: I guess he’s a musician) that she has received mail which states that her grandmother has died â€“ a grandmother she didn’t even know that she had. This is when Heather finds out that she was “adopted.” Little does she know just how infamous her lineage truly is.

Along with her friend Nikki and Nikki’s new boyfriend Kenny (who reminded me of Rob Schneider for some reason), Heather and Ryan embark on a journey to the isolated house Heather has inherited. Along the way, they pick up a hitchhiker named Darryl on his way to Louisiana. He offers them some cash for the ride and off they go.

Upon arriving in Newt, TX Heather meets up with her lawyer who shows her the estate, and delivers to her a letter from her deceased grandmother asking her to make sure she reads it (I bet I don’t need to tell you that she doesn’t). The five are absolutely enamored by the vastness of the mansion and all it has to offer. While Heather and her friends decide to go to town to get some supplies, Darryl volunteers to stay behind and stow all of their baggage. Unfortunately, Darryl has ulterior motives and begins to ransack the house looking for as many valuables as possible so he can make a fast getaway. As Darryl stumbles further and further into the depths of the house, he eventually comes to a door that won’t open no matter how hard he kicks it. What’s behind door number 1? Leatherface, but the added bonus is that he has a really big meat hammer that introduces itself to Darryl’s head repeatedly.

As you’ve probably guessed, this is the point in the movie where people begin to die, typically in a gruesome fashion consistent with any slasher/horror movie. That’s where most people would generally (and acceptably) begin to yawn. The difference (remember, in my humble opinion) is that the route which the movie took to explain the story, and give it a different element of depth than is typical in a movie of this style, was actually pretty well done.

Obviously there are some drawbacks to the movie. The biggest screaming flaw for me was the continuity of the timeline. The original happened in 1974. The technology in this one insinuates that it’s modern. This would mean that baby Heather would be almost 40 by now, which she clearly is not. As for the kills: are some them a bit predictable? Sure, but then again how many ways can a guy kill someone with a chainsaw or meat hook? Really. Chainsaws are pretty loud. Additionally we can’t ignore the fact that nearly any female in any horror movie, no matter how smart or good looking, when running away from the killer will make any viewer inevitably groan, “WHY THE FUCK DO YOU KEEP TRIPPING OVER EVERYTHING?”

This is why, despite my overall good impression of this movie I’m choosing to give it a 6 out of 10 for the site. I’m really only doing this for the benefit of the people out there who will piss and moan when they eventually see it. Personally, I loved the original and I felt that this movie was a great new direction for a sequel that can be expanded upon in the future (although probably not as well). If I was being opinionated and this was just some lame blog of my own doing, I’d give it an 8 out of 10, but this isn’t my website and I have you, the reader and eventual viewer, to take into consideration. For your sake, I’m trying not to disappoint you, but I do feel that this movie is highly enjoyable.