Last week, we had the opportunity to preview Netflix’s latest gorefest Texas Chainsaw Massacre (2022) as well as take part in an interview session with writer Fede Álvarez, director David Blue Garcia and actors Elsie Fisher, Sarah Yarkin and Nell Hudson. Here is our review with some quotes from the interview:

Tobe Hooper’s 1974 classic The Texas Chainsaw Massacre is a rite of passage into the world of horror films. Made on a shoestring budget by an, at that time, unknown filmmaker, the original TCM is among the most terrifying films to ever grace the big screen. From John Larroquette’s iconic intro narration to the moment when Sally Hardesty escapes in the bed of a pickup truck, the original film is an exercise in fear and tension. To quote Chainsaw and Dave from Summer School, “it had passion and a plucky spirit”.

Twelve years after the release of the original TCM, the sequels, reboots and re-imaginings began and they have since continued at a rate of about two per decade; for the most part, the only commonality between all of them is the hulking, childlike killer in the flesh-mask carving up hapless teenagers – Leatherface.

Now in 2022, the next addition to the franchise is ready to take its place in the TCM timeline. The newest entry was written by Evil Dead and Don’t Breathe alums Fede Álvarez and Rodo Sayagues with screenplay by Chris Thomas Devlin and was directed by David Blue Garcia.

Garcia, when we asked, talked about how shocked and excited he was to get the opportunity to direct this return to the franchise, “I first saw [the original] as a teenager”, he said, “and I knew that I had a lot to live up to when taking this on.” He went on to discuss the impact the original had not only on him, but to directors like Stanley Kubrick and others.

The new installment follows Lila (Fisher), her big sister Melody (Yarkin), and their friends, Dante (Jacob Latimore) and Ruth (Hudson), to the mostly abandoned town of Harlow, Texas. Melody and Dante are social media influencers who are out to make the world a more peaceful place. “Peaceful” also means that they’re staunchly anti-gun which doesn’t really play well in the outskirts of Texas, but I digress.

What they’ve done is purchased the deeds to all (or most) of the abandoned property in the town square to sell it off to their fans so they can all start a new peaceful community together with little outside interference from the “bad” people in the world. Like the character Richter points out to them in the movie: “sounds like a cult”.

In the interview, Fede Álvarez pointed out that, “the culture clash between city people and country folks has always been central to these films”, and that is certainly clear in this film as this group of “social media influencers” more or less invades this rural town.

When they arrive in the town, Dante spots a confederate flag hanging from one of the buildings and he wants it removed before his future investors show up – because they’re all coming together on a party bus. As he enters the building, which was a former orphanage, he’s greeted by an old woman who tells them that the building is still hers as she paid the bank off and Dante argues and calls the cops to have her removed and her old heart just can’t take the strain.

Living with the woman in the orphanage is her last ward – a very large man whose face is covered with long hair…and he doesn’t take kindly to the folks in his house upsetting his caretaker. Also, on the wall is an old photograph showing the old woman at a much younger age with her wards – one of which is a huge boy in the back whose face is crossed out in the photo. Makes you wonder if these are the same guy and who that guy may be…

Anyway, the police who came to escort the woman from her orphanage have now become the EMT’s who are rushing her to the hospital along with her gigantic ward and Dante’s girlfriend Ruth who went for the ride because they now apparently feel bad for what they’ve done. On the way to the hospital, the poor woman dies, and wouldn’t you know? The large boy gets angry. You wouldn’t like him when he’s angry. The cops/EMTs and Ruth certainly don’t like him when he’s angry – neither do the occupants partying in the party bus who later try to “cancel” him.

Just when you think you have a bead on where it goes from there, in comes Sally Hardesty. Yes, the Sally Hardesty who escaped Leatherace in the original film became a Texas Ranger and has spent a lifetime trying to find and kill him and now’s her chance because, as she says, “fifty years I’ve been waiting for this night”. That may sound familiar to some viewers.

There are some definite positives here. The film is shot quite well and looks great – director David Blue Garcia is an award-winning cinematographer, and I can see why. I like the idea of the main character Lila suffering from “survivors’ guilt” as she was a survivor of a school shooting, and the parallel it draws to Sally Hardesty and her guilt being the only one to survive “that fateful day” in the original film. The performances by most of the cast are solid, especially Elsie Fisher as Lila and Moe Dunford as Richter. Also, Olwen Fouéré as Sally looks a lot like the late Marilyn Burns to me. The gore and the practical effects were fantastic which is always fun to see and it’s a treat to hear John Larroquette’s voice kick off a TCM movie.

In the end though, TCM 2022 movie suffers a bit from trying to do too much with too little. It’s short 83-minute runtime (including intro and credits) is not enough time to tell the story of what happened to Sally and Leatherface in the fifty years since they were last together and to also cover the “social media influencers buy a ghost town” story while also tackling the “survivors’ guilt” angle. The movie also forgets that, for me to care when a character gets killed, I must like the character at least a little bit, and most of these characters ranged from “mildly annoying” to “piss off”.

Still, it’s definitely worth a watch to form your own opinion as I’m sure that Texas Chainsaw Massacre 2022 will find its fans; especially among the gorehounds out there. Actress Sarah Yarkin said that she “hopes fans of the genre will love the gore”…and gore is always fun. 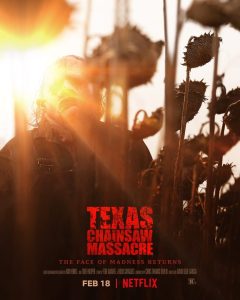