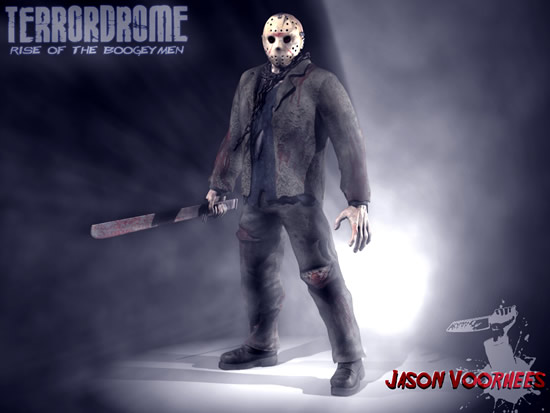 Terrordrome is a fighting game which allows you to have bloody battles with the most famous horror characters of all time.

We caught up with lead developer Marc Echave to talk about the much anticipated new release (2.9) of the game which is expected on Halloween 2013.

Horror News Network: Can you give us a full character list in Terrordrome 2.9?

Horror News Network: Can you tell us the stages that are available in the game?

Marc Echave: There is one stage per character, so 14 stages in total, yet Michael Myers has a night variation of his stage. Herbert West also has a stage variation, he always appears in the background as part of the stage, but if you play with him in the Re-animator stage, he won’t be in the background anymore.

Horror News Network: In fighting games, a finishing movie is always fun to have. Can you talk about the finishers in this game?

Marc Echave: Well, unfortunately finishers didn’t make it to the final version and I’m not sure there will ever be, although fans have been asking for this feature a lot. The reason is that it takes lot of time to create the finisher system itself, and we’ve been focusing on the actual game play rather than working a lot of time on something cool but that doesn’t offer much regarding game play and game mechanics. Many years ago I prepared cinematic sequences for character’s death, but I left it incomplete after realizing the huge amount of work needed to create it. It also has to do with the engine I’m using and its limitations.

Horror News Network: How many weapons does each character have and can you list them?

Marc Echave: Every character has his most iconic weapon based upon the movies. Classic Jason is the only one that has the ability to switch between axe and pitchfork. He also uses other tools during specific attacks. It’s hard to list every one of them but it covers a wide variety of weapon and tools for different kind of attacks, the most crazy must probably be a bat-winged-flying head!

Horror News Network: Can this game be played with a standard keyboard or do you need a joystick?

Marc Echave: Keyboard is just fine but you can use joysticks and gamepads as well. It helps when playing versus mode.

Horror News Network: Do you recommend any certain joystick for this game?

Marc Echave: I personally have used a Microsoft gamepad (similar to the Xbox 360) and it works just fine. I haven’t tried other joysticks but I know that people use different kinds. There even have been several people who built they own Terrordrome arcade cabinets!

Horror News Network: Which characters that didn’t make the game are you most disappointed about?

Marc Echave: At the beginning of this project I had so many characters in mind that I wanted to create different series of Terrordrome (boogeymen, terror from outer-space, classic, anti-heroes, etc…). Terrordrome could have become a huge cross-over of many genres not only horror. I had to skip that idea and focus on a select few characters. If I could add a few more characters I would add The Creeper (Jeepers Creepers), Victor Crowley (Hatchet) and maybe Leprechaun.

Horror News Network: Is this it for Terrordrome or will there be more versions and updates in the future?

Marc Echave: We will probably release a patch to fix bugs and balance the characters once the Final version is out, but we don’t plan to add anymore characters. We want to finish the game so we can carry on to the next step which is a commercial sequel/prequel to Terrordrome. People are excited about this news and often ask for specific characters that weren’t featured in TRDM but this is not exactly how this new project will work, at least not entirely. Because of licenses issue we’re headed to a slightly different direction. Remember when I was talking of extending the game beyond the realm of slashers? Well, this could be it.

Horror News Network: In closing, what would you like to say to our readers about Terrordrome?

Marc Echave: If you ever dreamed of playing a fighting game with your favorite horror movie character, this is your chance. And if would like to support me and my team as independent developers with our future projects, follow me on twitter (Hur4c4n) where I frequently give reports on all works in progress.

Horror News Network: Thank you for your time and dedication to a fantastic horror game! You can learn more about Terrodrome here: http://www.terrordrome-thegame.com/