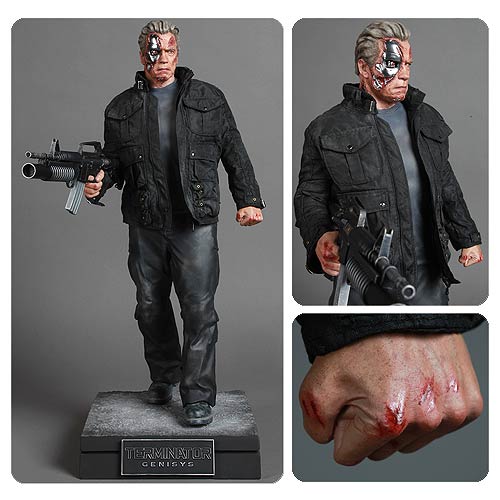 Arnold Schwarzenegger makes his triumphant return to the Terminator franchise in Terminator Genisys and what better way to celebrate than to pick up this Guardian statue. The battle-damaged 1:4 scale Terminator Genisys Guardian statue portrays Sarah Connor’s Guardian from the Terminator franchise. The Guardian is set on the same size base as the 1:4 scale Endoskeleton in order to show off the similarities and size proportions between the two products. The bases are not identical. The Guardian comes with two interchangeable hands and sports a cloth jacket. The first hand is equipped with a rifle that he uses in the film. The second hand features the magnetic rings he uses to fight the T-3000 at the end of the film. The statue measures 22-inches tall including base x 16-inches long x 9-inches wide.