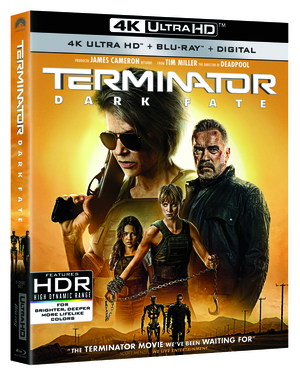 Terminator: Dark Fate is a direct sequel to the 1991 masterpiece, Terminator 2: Judgment Day. To achieve this feat, James Cameron returned to the franchise as a creative executive producer, and both Arnold Schwarzenegger and Linda Hamilton appear in lead roles. While it’s always a great pleasure, it isn’t much of a surprise to see Schwarzenegger appear in a new Terminator movie (he’s returned to his iconic role on several occasions). However, it’s downright thrilling to see Hamilton back as Sarah Connor, looking like she hasn’t missed a beat since Terminator 2. Several recent films have attempted to bring back the great series leads of yesteryear with mixed results, but the return of Linda Hamilton as Sarah Connor is the absolute best of them. Between her legendary screen presence, her quick-witted one liners, and her downright badass action moments, it is clear that Hamilton and the filmmakers have nailed how to bring back an iconic character to the silver screen. While he isn’t in the film as often, Schwarzenegger glows as usual in Dark Fate, mixing his trademark deadpan humor with a more reflective approach to deliver a T-800 we haven’t seen before. Director Tim Miller clearly understands what made the interactions between Schwarzenegger and Hamilton so interesting in Terminator 2, and he captures and advances their complicated relationship in some key scenes. The other big ode to Terminator 2 lies in the pacing and early action sequences of Dark Fate. A clear effort was put into capturing as much of the road chases in camera as possible, and the pacing of the film (including its moments of downtime) hearken back to the blockbusters of the 90s. 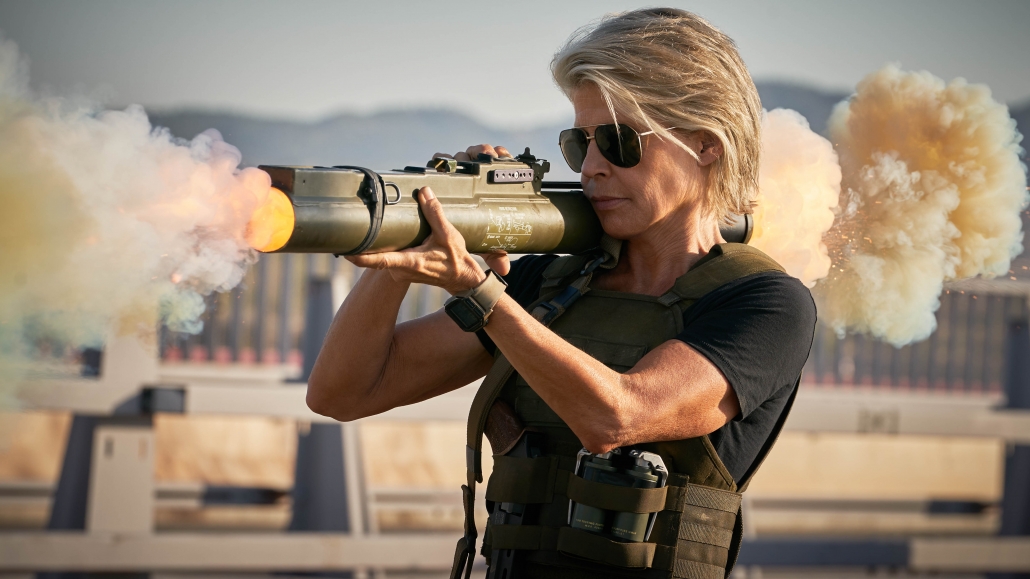 Cameron and Miller don’t simply stick with the characters and formula of the previous films, and the elements of the film which essentially reboot the series are where fans will either love it or hate it. Mackenzie Davis stars as Grace, a human being from the future with enhanced cybernetic abilities which make her better equipped to fight Terminator machines. She comes from a future where Skynet is defeated, but a new computer program named Legion has taken its place in attempting to conquer humanity. Grace is sent back by a future Dani Ramos, played by Natalia Reyes, to protect the younger Dani from a REV-9 machine that’s on a mission to kill her. Dani is in the same place Sarah Connor was in at the start of Terminator: young, inexperienced, and unwilling to accept the deck of cards fate has handed her. Through some flashback sequences and dialogue sequences, we learn of Dani’s relationship with Grace and Grace’s transformation into a superhuman being. There is a delicate balance in maintaining the story arcs between the original cast and the new cast, and the film sometimes stumbles in directing the audience where to invest their emotions. But let’s face it: fans don’t want something unpredictable and new in a classic franchise, and that’s clearly why the storyline repeats itself and the Terminator’s skeleton looks essentially the same even though they’re no longer being manufactured by Skynet (I guess copyright claims aren’t a problem in the dystopian future!). However, by the time the film reaches its action-packed climax, the cast of characters are whittled down in a series of meaningful sendoffs and the audience is left with a clear direction of where the series can continue and what the characters’ roles will be in it. 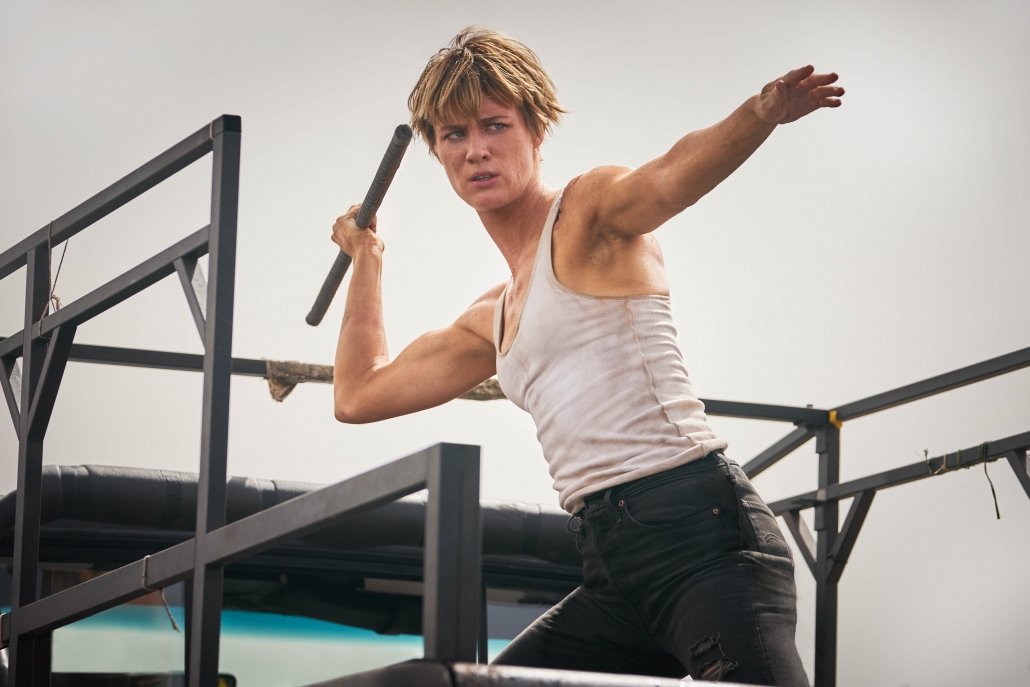 Mackenzie Davis is absolutely the strongest addition to the new cast of Terminator: Dark Fate. Her science fiction experience in such hits as Black Mirror and Blade Runner 2049 have prepared her well to deliver a solid performance, and her insane training for the film has turned her into an action hero machine. Throughout Dark Fate, it was interesting to see how Grace balanced her human and cybernetic traits as she interacted with other characters. Davis achieved a fine balance in Schwarzengger’s cold and calculated approach in the previous entries with the touch of a human being who has a legitimate emotional vested interest in protecting Dani.

While Dani’s transformation from clueless target to hardened leader of the resistance seems uneven at times, Natalia Reyes plays the character well in flashback (or is it flashforward?) sequences and the scenes in the final act where Dani begins to tap into her power. Gabriel Luna completes the new cast as the REV-9, a combination of both the raw power of the Terminator endoskeleton and the shapeshifting liquid speed of the T-1000. His bag of terminating tricks includes a new move where the liquid elements can split from the endoskeletion and operate independent of it, or the two can work together to coordinate attacks. The sequence plays well on screen and evokes classic James Cameron filmmaking. Luna is a good fit for the role, and his performance evokes many of the iconic traits of Robert Patrick’s performance as the T-1000.

Whether you watch Terminator: Dark Fate on Blu-Ray or on 4K UHD, you’re going to be impressed by the presentation of the film. Both formats offer a clean, crisp transfer and solid options for sound. The 4K UHD version is the definitive format for viewing this film, and it offers better details and more realistic textures, especially when it comes to the layered accents in the film’s interior scenes. The HDR on this disc isn’t going to cause you to reach for your Persol Ratti sunglasses, but it definitely enhances the film’s colors in both daytime and nighttime scenes.

The Blu-Ray disc includes a variety of special features, which are a sight for sore eyes on the age of barebones releases. The deleted and extended scenes are all very strong, and some of them are more interesting than what ended up in the final cut of the movie (the alternate scenes of the group crossing the American border are especially interesting). The making-of featurettes show the extent the crew took in transforming the level of detail of the sets into authentic environments. It was inspiring to see the filmmakers discussing even how to capture the smell of a location, knowing full well that it couldn’t possibly be captured on film. It’s moments like that which reveal the level of commitment everyone had in making this film. 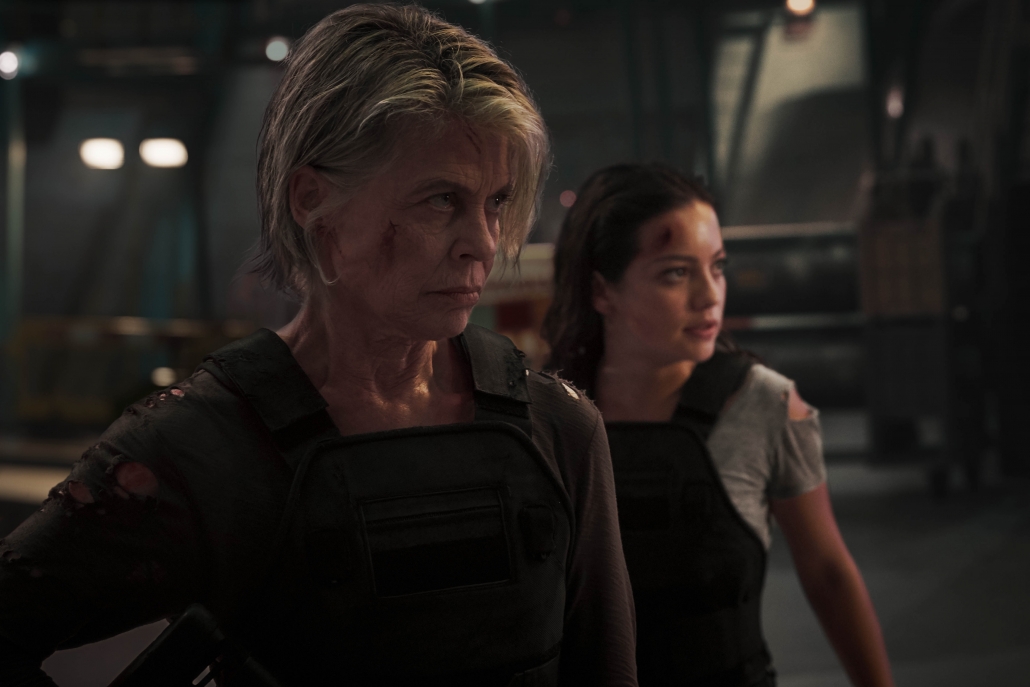 Terminator: Dark Fate is the closest any of the other Terminator sequels have gotten to replicating the magic of the original James Cameron films, and the behind the scenes clips on the Blu-Ray disc document the hard work that went into putting this film together.  The movie looks great on 4K UHD and on Blu-Ray, and the special features push it over the top as a package you’d like to sit on the shelf alongside Terminator and Terminator 2: Judgment Day.