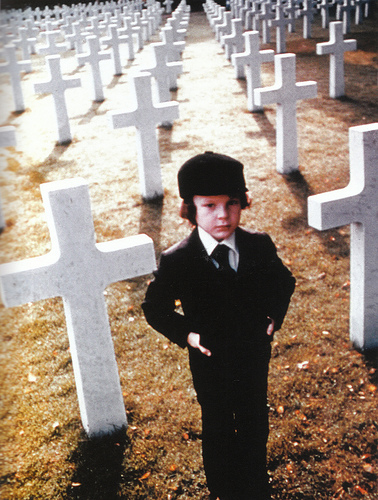 Ten Things You Might Not Know about … The Omen!

1. The original ending had all three members of the Thorn family killed at the conclusion

3. David Warner kept his severed head for years until his divorce when his ex-wife obtained custody of it

4. Gregory Peck was given the role of Ambassador Robert Thorn after Charlton Heston turned it down

5. Richard Donner decided that Harvey Stephens’ naturally blond hair should be dyed black to give him a more sinister look in his role as Damien.

6. Before he met Harvey Stephens, Richard Donner was considering casting a girl as Damien, as the casting process for the child was proving to be so difficult

7. Rottweilers experienced a surge in popularity in the US after the release of this film

8. As part of its pre-release publicity campaign, and to point out the significance of “the three sixes” as the Sign of Satan, the movie was sneak-previewed nationwide in the       US on June 6 1976

9. When the fishbowl falls to the ground, (dead) sardines painted orange were used in place of actual goldfish, which director Richard Donner refused to kill for the sake of         making a movie.