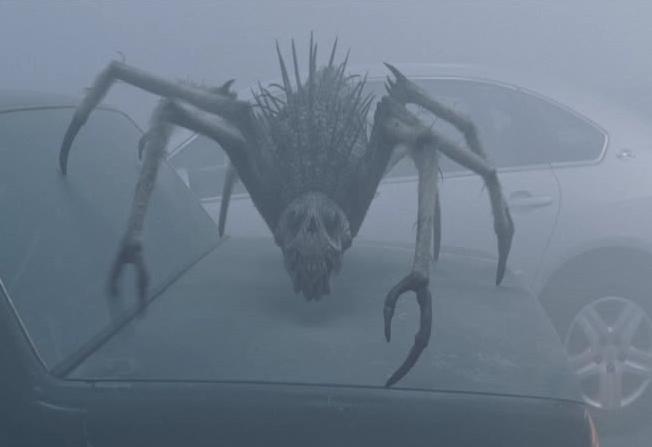 Ten Things You Might Not Know About … The Mist!

9. Frank Darabont originally wrote an opening scene showing the military scientist referenced to by Private Jessup accidentally opening the dimension portal that allows the creatures and the mist to enter our world. Over dinner, Andre Braugher questioned Darabont whether this scene was necessary. After thinking about it for a week, Darabont was convinced to scrap the scene, leaving the nature of the mist more ambiguous.

8. Frank Darabont wanted to cast Stephen King in a supporting role, but King turned his offer down. The role eventually went to Brian Libby.

7. Frank Darabont had originally been offered $30 million by a producer to make this film, but with one crippling caveat: Darabont would have to change his planned ending, a conclusion he’d personally envisioned and nursed for twenty years. In the end, he turned to producer Bob Weinstein and made the movie for half the amount, but only after forfeiting his directorial salary.

6. In the pharmacy scene, when David Drayton is collecting a comic book for his son, Frank Darabont proposed to Thomas Jane that he should grab a copy “The Punisher: War Journal” since Jane played the Punisher three years earlier. Jane declined because he had a falling out with the producers of the The Punisher franchise and decided not to return for the sequel. He instead grabs an issue of “Hellboy” as a shout out to friend Ron Perlman.

5. The line, “My life for you”, spoken by Mrs. Carmody in the film, is a recurring line in other Stephen King texts, spoken by villainous characters to Randall Flagg (alias Walter O’Dim, Marten Broadcloak, etc.), the super-powered master of evil in several King stories.

4. The original Stephen King novella was also the inspiration for the video game Half-Life, where scientists at a top secret military base are running experiments with inter-dimensional portals and open the flood gates to its hostile inhabitants.

3. At the end of the film, when the rescue truck with Melissa McBride passes by David, Frank Darabont originally wanted a second truck to pass by David. This one would have been filled with various people from the market, including Jim, Bud, Mr. Mackey, and most of Mrs. Carmody’s ex-followers, indicating that they were rescued safely from the store and making David realize that he and his group should have never have even left the market in the first place. Unfortunately, most of the extras and other actors had already left because their parts were finished, so Darabont had to scrap this idea.

2. During an action scene in the film, a man runs into a wire rotating-book shelf in the grocery store. If you look carefully, you can clearly see that all the books on the shelf are written by Stephen King.

1. Stephen King says that he was genuinely frightened by this adaption of his novella; Frank Darabont described that as the happiest moment of his career.