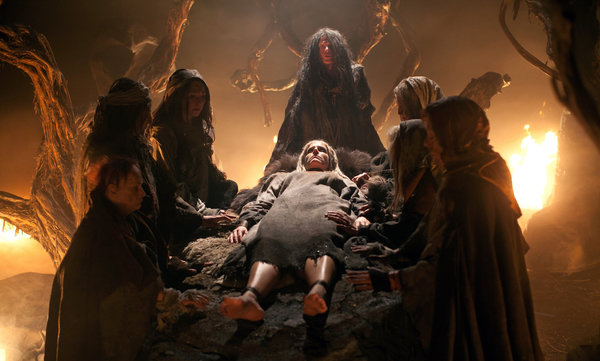 Ten Things You Might Not Know About … The Lords of Salem!

10. Filmed in the actual town of Salem
9.  Actors considered for some roles were Richard O’Brien (he was not available) and Hammer girl Caroline Munro. Goldie Hawn was considered for the role of Margaret Morgan.
8.  Footage was shot with Daniel Roebuck as a serial killer being interviewed on TV, but Zombie decided to go with clips from old movies featuring characters in masks instead.
7.  Rob Zombie described the film as “If Ken Russell directed “The Shining”.
6.  Rob Zombie imagined the witches as Manson-esque hippies.
5.  The screenplay had a subplot about a film named “Frankenstein and the Witchhunter”, a kind of Hammer films exploitation that the characters of Matthias and his wife attend thanks to free tickets from the radio station. Rob Zombie shot this “film-within-the-film” with Udo Kier, Camille Keaton and Clint Howard. But all the scenes related were deleted from the final cut.
4.  Rob Zombie wrote a novelization of the film along with writer Brian Evenson. According to Zombie, the novelization is based on his original screenplay, which differs significantly from the final script used in the film.
3.  Meg Foster described working with Rob Zombie as an experience like no other in her career, comparing it to walking through “a labyrinth.”
2.  The scene where they first try to play the record took a while to film as they struggled with how to create the effect of the needle jumping across the LP. As the effects guys worked on a line of filament another crew member suggested simply removing the needle from the arm.
1.  Rob Zombie has hinted at this film being a metaphorical and spiritual prequel to his Halloween films.
Share FacebookTwitterRedditEmail