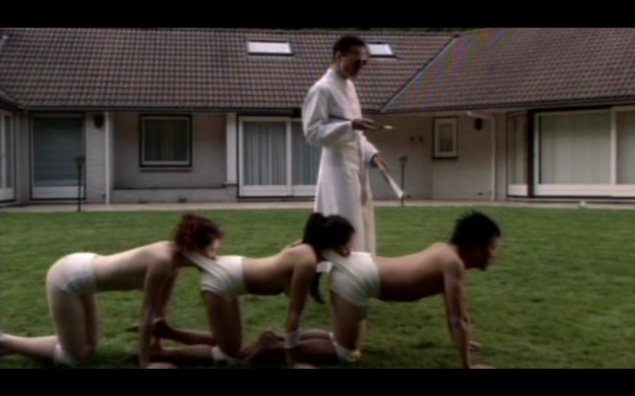 Ten Things You Might Not Know About … The Human Centipede!

9. Dieter Laser came up with the ideas to both smell the pus and lick the blood on the stairs.

8. Not surprisingly, Pier Paolo Pasolini’s Salo was a leading inspiration for Tom Six.

7. The two female leads were cast in New York City. Moreover, Tom Six showed a drawing of the human centipede to all the actresses who showed up to the casting sessions.

6. The actors playing the centipede were given massages at the end of every day’s filming due to being on their hands and knees all day long.

5. The paintings of conjoined twins displayed throughout Heiter’s villa were painted by Tom Six, which he felt contributed to the atmosphere in the house.

4. The concept of the film arose from a joke Tom Six made with friends about punishing a child molester by stitching his “mouth to the ass of a very fat truck driver.”

3. Roger Ebert refused to assign this film a star rating for his review (not to be confused with giving it a zero star rating, which he hands out to the very worst films that he sees), saying it doesn’t really matter whether the film is perceived as good or bad. He closes the review by writing, “[The film] is what it is and occupies a world where the stars don’t shine.”

1. Many actresses walked out of the auditions in disgust after discovering what the role actually entailed.