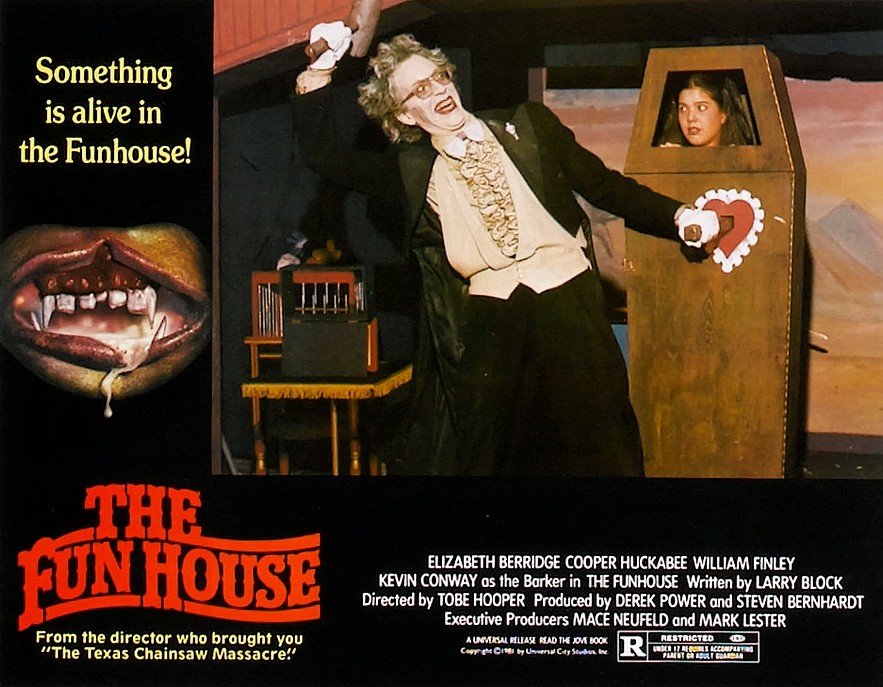 Ten Things You Might Not Know About … The Funhouse!

10. According to actor Kevin Conway, director Tobe Hooper was a huge “Coke-head” during production of this film. Hooper allegedly consumed a minimum of 12 cans of Coca-Cola a day.
9.  The animatronic fat lady laughing at the end of the film is a reference to the phrase “It ain’t over till the fat lady sings”.
8.  Some of the props in Joey’s bedroom were owned by Shari Lewis of “Lamb Chop” fame (such as the winking ventriloquist dummy) and were obtainable because co-executive producer Mace Neufeld was a friend of hers
7.  Author Dean R. Koontz later expanded and embellished his novelization of this film into another fully-fledged novel.
6.  During production, director Tobe Hooper acquired a number of antique, clockwork and mechanical old toys which had been used as props in this movie.
5.  Director Tobe Hooper wanted Andrew Laszlo for his cinematographer on this show because he liked Laszlo’s lighting of Walter Hill’s The Warriors
4.  The original plan was to have makeup effects artist Rob Bottin play the monster, before director Tobe Hooper caught a performance by mime Wayne Doba, who subsequently landed the role
3.  The girls in the tent were local strippers from Miami, Florida.
2.  Director Tobe Hooper was bitten by a brown recluse spider during filming.
1.  Steven Spielberg asked Tobe Hooper to direct E.T. the Extra-Terrestrial  but he turned it down because he was busy on this movie. However Hooper and Spielberg would work together on Poltergeist
Share FacebookTwitterRedditEmail