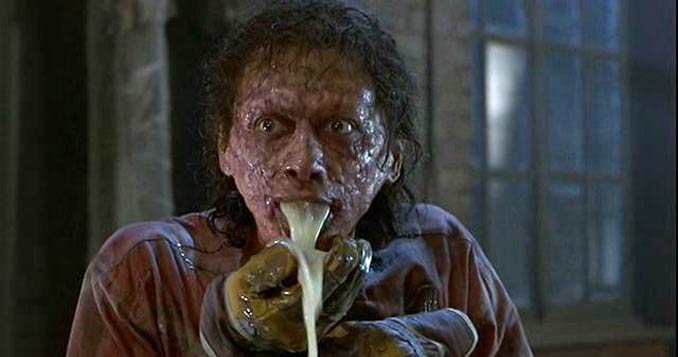 Ten Things You Might Not Know about … The Fly!

10. A happier ending was shot but ultimately never used.  In the alternate ending, Veronica has another dream of her unborn child, this time as a baby with beautiful butterfly      wings.

9. Stathis’s melting hand effect was created by sculpting the mutilated hand, then building up an intact hand on top of it out of gelatin. The gelatin was then melted using           stage lights and a hair dryer, and filmed at low speed.

8. Geena Davis claims that the only time she felt “grossed out” by the amount of gore was in the scene where Seth’s ear falls off and she holds him. She states that her             reaction to holding her face up to Goldblum’s was not acting and that she was indeed really grossed out.

7. David Cronenberg plays the obstetrician who delivers the maggot baby.

5. The design of Brundle’s Telepods was inspired by the engine cylinder of Cronenberg’s Ducati 450 Desmo motorcycle.

4. Jeff Goldblum was often wearing as much as 5lbs of prosthetic makeup in his transformation scenes.

3. An opera in two acts based on the movie was produced for the stage in 2008. David Cronenberg served as director, Howard Shore composed the music and the lyrics were     written by David Henry Hwang (with whom Cronenberg collaborated on M. Butterfly.

2. This film was originally a project for Tim Burton to direct.

1. Mel Brooks didn’t want people to know he was a producer for the film because he thought people wouldn’t take it seriously if they knew he was involved