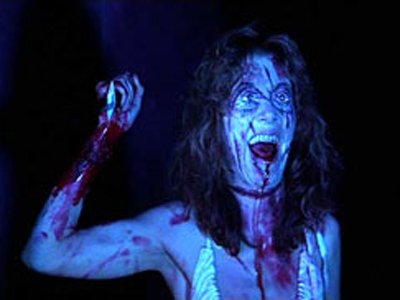 1. Dario Argento was inspired to make this film by stories of partner Daria Nicolodi’s grandmother, who claimed to have fled from a German music academy because witchcraft was being secretly practiced there.

2. The woman playing Helna Markos is not credited. According to Jessica Harper, the woman was a 90 year old ex-hooker Argento found on the streets of Rome.

4. The voice heard whispering on the soundtrack is that of Goblin band member Claudio Simonetti.  Simonetti stated  that much of what he whispers on the music score is just gibberish.

5. For the wide shots of the ‘maggots’ falling from the ceiling the crew would drop gains of rice down onto the actresses from above.

6. Suspiria was the first Italian film to make use of the then newly invented Steadicam.

7. Dario Argento helped compose the score with the band Goblin and played it at full blast on set to unnerve the actors and elicit truly frightened performances.

8. The film’s finale was inspired by a dream that Daria Nicolodi had.

9.  Dario Argento had cinematographer Luciano Tovoli watch Snow White and the Seven Dwarfs to have him model the color scheme of that film for Suspiria.

10.  Jessica Harper said that the most frightening scene in the film for her was the grand finale where everything explodes and shatters around her as she flees the academy. Harper said that the rigged explosions where quite unnerving as they were placed close to her on the set.