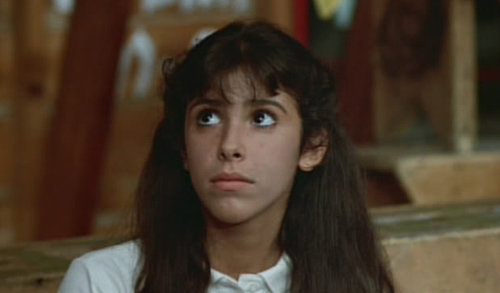 Ten Things You Might Not Know About … Sleepaway Camp!

10.  Body count: 11.
9.  Jonathan Tiersten was the stand-in and hand double for all of Angela’s actions during the murders. This was done because he had more masculine hands with veins, which could better throw off the audience in regard to the killer’s identity. He even donned a wig for the back-lit shot in which Angela finds Judy in the dark.
8.  Rescue workers seen carrying away the injured cook in the movie were actual paramedics from the local town. Their jackets displayed the squad they belonged.
7.  Christopher Collet, who played Paul, had a latex version of his head created for the final scene. Someone on the set took the head.
6.  A shot of dead Judy was cut by the MPAA for being much too grisly.
5.  The climactic scene was accomplished by using a nude man wearing a mask cast from Felissa Rose’s face. There were talks, and even molds created for a strap-on prosthetic penis for Felissa herself to wear, but the idea was ultimately scrapped. The thin man who stood in for Angela in this one scene was a college student who needed to get drunk before he was able to do the scene.
4.  Some of the campers seen getting off the buses at the beginning of the film are relatives of the cast and crew.
3.  Jane Krakowski was originally cast to play Judy.
2.  The original artwork for the Sleepaway Camp Survival Kit boxed set, which included the unauthorized sequels, was recalled after complaints were made by the American Red Cross.
1.  Director Robert Hiltzik dedicated the movie to his mother.
Share FacebookTwitterRedditEmail