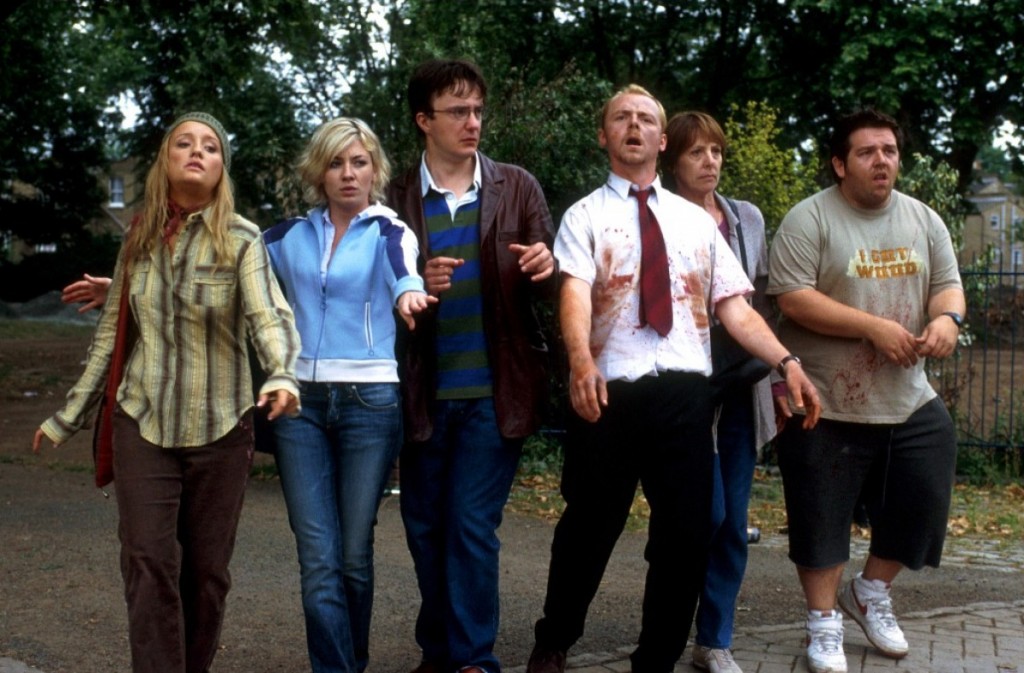 Ten Things You Might Not Know About … Shaun of the Dead!

1. After Shaun joins Ed at the Winchester after breaking up with his girlfriend, Ed uses his “Clyde impression” (Clyde, the orangutan from Every Which Way But Loose) in an       attempt to make Shaun feel better.

2. Chris Martin of Coldplay, who appears as himself on a news report near the end of the film promoting ZombAid, also plays a zombie

3. Most of the posters in Shaun’s living room are of artists on the Ninja Tune record label. These include Funki Porcini and The Herbaliser.

4. The rifle used in the Winchester is a Winchester model 73. It is also the same weapon used in both versions of ‘Night of the Living Dead’

5. While flicking through the Yellow Pages, Shaun finds the number for an Italian restaurant named Fulci’s, a reference to Italian horror director Lucio Fulci

6. When Shaun and his friends are trying to get inside the pub, horror writer and Frightfest organizer Alan Jones can be seen as a zombie walking past the phone box. He’s       the bald one in a checkered shirt.

7. Shaun walks past a road sign for Weston Park which is a street in Crouch End, London, the same locale as his sit-com Spaced (1999) and where Simon Pegg now lives.

8. When asked by an interviewer why they chose to have slow moving zombies instead of running zombies, Simon Pegg simply replied, “Because death is not an energy             drink.”

9. George Romero was so impressed with Simon Pegg and Edgar Wright’s work that he asked them to appear in Land of the Dead, the fourth part of his Dead series, in             cameos as zombies.

10. Nick Frost allegedly kept his genitals shaved throughout the production to create a genuine need to scratch that the character demanded.