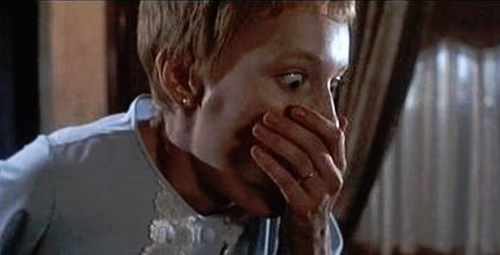 Ten Things You Might Not Know About … Rosemary’s Baby!

2.  Mia Farrow actually ate raw liver for a scene in the movie.

3.  There is a popular rumor that Church of Satan founder Anton LaVey gave technical advice and portrayed Satan in the impregnation scene. This is false – LaVey          had no involvement with the film.

4.  The devil costume that was worn in the impregnation scene was later re-used in the film Asylum of Satan.

5.   Mia Farrow does the vocals on the title-sequence lullaby

6.   Producer William Castle wanted to display a grotesque demon baby at the end of the film when Mia Farrow looks at her child but Roman Polanski vetoed the             idea in lieu of a more ambiguous scene.

7.   According to Mia Farrow, the scenes where Rosemary walks in front of traffic were spontaneous and genuine. Roman Polanski told her that “nobody will hit a           pregnant woman.”

10.  John Lennon lived (and in 1980 was murdered) in the Manhattan apartment building called The Dakota where Rosemary’s Baby was filmed.