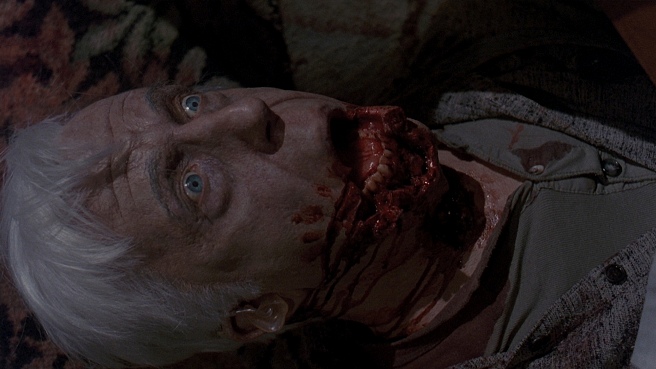 Ten Things You Might Not Know About … Pet Sematary!

10. Stephen King plays a small role in this film as a minister.
9.  The portrait of Zelda as a child also features a gray cat at the child’s feet, an obvious foreshadowing.
8.  George A. Romero was originally set to direct but when filming was delayed, he dropped out, and Mary Lambert stepped in.
7.  During the film, the character played by Fred Gwynne mentions that he had a pet named “Spot”. “Spot” was also the name of the family pet on the TV show The Munsters, also starring Gwynne.
6.  Stephen King is a big fan of the The Ramones and referenced some of their songs in the novel Pet Sematary. In homage, The Ramones wrote and performed the theme song “Pet Sematary”, which is featured in the films closing credits.
5.  The story was inspired by actual events experienced by Stephen King that occurred while he was living in Orington, Maine with his family. King recalled that while living there his daughter’s cat was killed in the highway. Much of Ellie Creed’s emotional outburst was taken directly from King’s own grief-stricken daughter. King also remembered that once his youngest son had nearly run into the road while a truck was speeding down it, much like Gage does in film. The character of Judd Crandall was based on the elderly neighbor that lived across the road from King. Also there was an actual pet cemetery in the woods behind the King house, which became the basis for the one in the novel.
4.  The original screenplay featured the ‘wendigo’ (a Native American demon) that was mentioned in the novel, but it was ultimately cut from the film. Its presence is implied only twice: first, in the scene where Louis is walking through the woods at night and hears something large knock down a tree. Second, when Judd first takes Louis up to the Indian burial ground there is some kind of loud crash deep in the forest followed by a long, almost feminine howl. Jud says that “it’s only a loon” but it’s clear that he doesn’t entirely believe it himself.
3.  Bruce Campbell was the first choice for the role of Louis Creed.
2.  Stephen King was present on location for most of the shooting of the film. The area it was shot in was only 20 minutes away from his home in Bangor, Maine.
1.  The role of Zelda, Rachel’s dying sister, was played by a man. Director Mary Lambert wanted Zelda and her scenes to frighten the audience but did not believe that a 13-year old girl was scary so she cast Andrew Hubatsek in the role to make something be “off about Zelda”.
Share FacebookTwitterRedditEmail