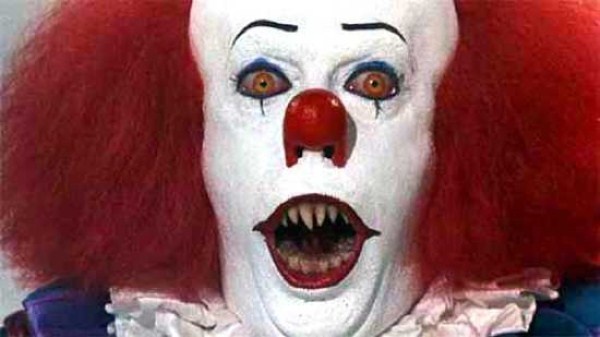 10.  The spider at the climax was a fully operable puppet. John Ritter was disappointed that the final battle had to be fought with a puppet and not Tim Curry, because he felt Pennywise was the real villain of the show, and not some fake spider.

9.  Although the members of the Losers’ Club are all supposed to be the same age (41 years), the actors who played them as adults ranged widely in age. At time of filming, the youngest, Dennis Christopher was 34, Harry Anderson 37, Annette O’Toole 38, Richard Thomas 39, John Ritter and Richard Masur both 41, and the oldest, Tim Reid, was 45.

8.  The movie the children are watching when they drop drinks and popcorn on the bullies is I Was a Teenage Werewolf.

7.  The adult actors had to be careful what they touched during the sewer scenes because the place was so rusty, there was a very real danger of tetanus infection.

6.  The Chinese restaurant scene was Richard Thomas’ favorite scene in the movie. It was filmed in three days. There were puppeteers under the table working Pennywise’s fortune cookies. The scene was shot on a handheld camera to make it scarier

5.  Bill is the author of a horror novel titled “The Glowing.” This may refer to Stephen King’s “The Shining.”

4.  Alice Cooper was considered for the role of Pennywise

3.  To get the effect of “It” moving through the pipework, a dolly crane was built and pushed through the piping. It was done from “It’s” point-of-view because Tommy Lee Wallace believed that what we imagine is often scarier than what we see, a trick he learned from his old mentor, John Carpenter

1.  Tim Curry was reluctant to take the role of Pennywise initially because he didn’t relish the thought of being buried under so much makeup. When he played Darkness in Legend, it was a difficult and demanding role, and the hours in makeup was still fresh in his mind. To compromise, Tommy Lee Wallace minimized the amount of makeup on Curry, and a lot wasn’t necessary anyway because Curry’s performance was so strong.