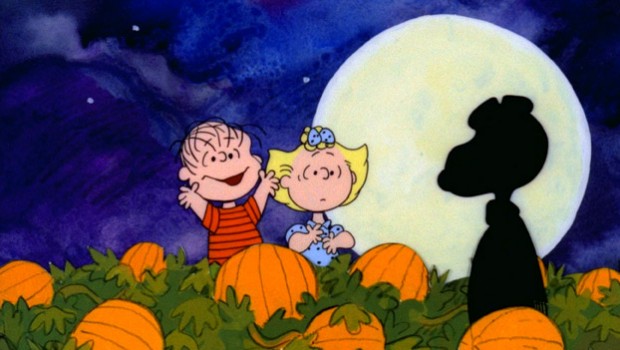 Ten Things You Might Not Know About … It’s the Great Pumpkin, Charlie Brown!

10. In the trick-or-treating scene during which Lucy asks for an extra piece of candy for her brother, her right hand has five fingers when she holds it up, but her left hand only has four fingers.
9. Just before Snoopy rises as the Great Pumpkin, the moon moves along with him as he crawls through the pumpkin patch.
8. When Schroeder plays “Pack up your troubles,” at the exact point where the lyrics would go “smile, smile, smile”, Snoopy gives three toothy grins.
7. The songs that Schroeder plays for Snoopy include World War One songs ‘It’s a Long Way to Tipperary’, ‘There’s a Long, Long Trail’ and ‘Roses of Picardy’ and ‘Pack Up Your Troubles In Your Old Kit Bag.’
6. When Linus walks into the living room after writing a letter to the Great Pumpkin, Lucy is sitting in front of the TV reading a TV guide. The picture on the cover of the magazine is a picture of Lucy.
5. When Snoopy pretends to cross wartime France as a downed pilot, he passes signs pointing to two real locations in the Champagne country northeast of Paris: Chalons sur Marne and Pont a Mousson.
4.  Actress Kathy Steinberg had almost finished recording all her lines of dialog as Sally when the producers received a phone call from Steinberg’s mother informing them that one of Kathy’s teeth was loose. Fearing that a sudden lisp would ruin the continuity dialogue, the producers rushed the young actress into the studio to finish recording her lines. Just as Steinberg was speaking her last line, the tooth came flying out of her mouth.
3.  When the trick-or-treaters visit Linus and Sally in the pumpkin patch and laugh at them, Lucy’s witch mask changes from scowling to grinning.
2.  When the kids are putting on their Halloween costumes, Charlie Brown’s ghost sheet has many holes in it. Shortly after, when Snoopy is walking out the front door as the World War I Flying Ace, Charlie Brown holds the door open for him and salutes. When he does this the many holes in his ghost costume disappear, only to re-appear later.
1.  After this special originally aired, children all over the country sent candy to Charlie Brown out of sympathy.
Share FacebookTwitterRedditEmail