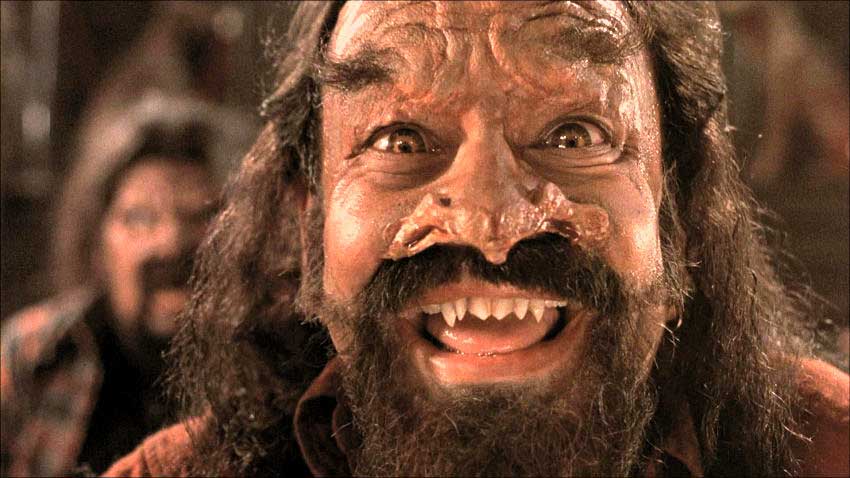 Ten Things You Might Not Know About … From Dusk till Dawn!

10. Even though the character of Earl McGraw (Michael Parks) is killed in this film, Parks played the role again in the films Kill Bill: Vol. 1, Death Proof, and Planet Terror

9. There was a special makeup effect in which one of the stripper-vampires has her stomach open into a large mouth. She shoves a bar attendant’s head into the large mouth, and bites it off. The effect was so graphic that Quentin Tarantino didn’t even want to see it

8. Erik Estrada was lined up to play Carlos the gangster that Cheech Marin ended up playing.

7. Quentin Tarantino originally gave the script to makeup effects man Robert Kurtzman to direct. When he couldn’t commit, Tarantino showed the script to Robert Rodriguez, who eagerly signed on

6.  The name of the movie is taken from the signs found on drive-ins. These signs indicate the length of the shows, which ran “from dusk till dawn”.

5.  Salma Hayek did not have a choreographer for her dance. Director Robert Rodriguez just told her to feel the music and dance to it. Rodriguez would later use the same tactic with Jessica Alba in Sin City

4. Green blood was used for the vampires to get the movie past the censors

3. Salma Hayek has a real fear of snakes and had always refused to be near them. Naturally when she read the script, she knew her phobia would prevent her from taking the part. Robert Rodriguez conned her into thinking that Madonna was ready to nab the part instead so Hayek spent two months with therapists to overcome her fear.

2. Before George Clooney was cast, Tim Roth, John Travolta, Michael Madsen, Steve Buscemi, and Christopher Walken were offered the role of Seth Gecko. All passed because of scheduling conflicts

1. The exterior set for the Titty Twister burned down at one point. This caused great delays in filming. Other delays were caused by dust storms and the threat of union action because of shooting with a non-union crew