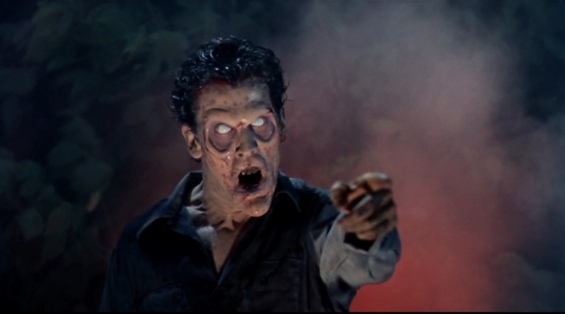 Ten Things You Might Not Know About … Evil Dead II!

1. Sam Raimi had hoped to send Ash back to medieval times in Evil Dead II’s opening minutes, but instead opted for the film’s cliffhanger ending to set the hero’s medieval quest up as a possible third film.

3. Kassie DePaiva who played Bobbie Jo had a recurring role in the soap opera The Guiding Light

4. Sam Raimi plays the first knight to raise his sword and give his speech before hailing to Ash.

5. The character of Bobbie Jo was inspired by Holly Hunter, who was a housemate of Sam Raimii in the early 80s, along with Joel Coen and Frances McDormand.

6. Stephen King was such a huge fan of The Evil Dead that he convinced producer Dino De Laurentiis to have his production company DEG finance Evil Dead II.

7. Freddy Krueger’s glove can be seen hanging above the door of the tool shed when Ash carves his girlfriend up with a chainsaw.

8. Most of the film was shot on a set built inside the gymnasium of the JR Faison Junior High School in Wadesboro, North Carolina.

9. One of the books on the can that traps Ash’s possessed hand is Ernest Hemingway’s A Farewell to Arms.

10. To give the film a strange rhythm, the action scenes were shot at a greatly reduced frame rate.