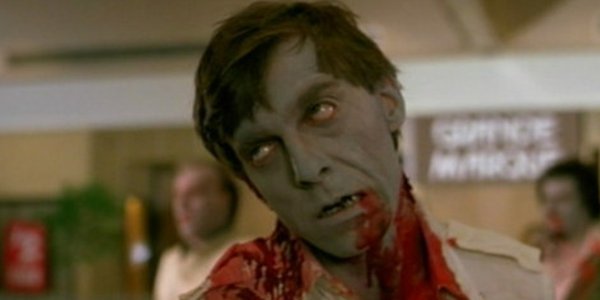 Ten Things You Might Not Know about … Dawn of the Dead!

1.  Dawn of the Dead originally ended with Peter shooting himself in the head and Fran committing suicide by sticking her head up into the blades of the copter.          Romero decided that this conclusion would be too depressing and gave Peter and Fran a little bit of hope.

2.  Extras who appeared in the film were given $20 in cash, a box lunch, and a Dawn of the Dead T-shirt.

3.  Real cow intestines were used in the scene where a biker gets his guts ripped out.

4.  The two zombie children who attack Peter in the airport house are played by Donna Savini and Mike Savini, the real-life niece and nephew of Tom Savini.

5.  Gaylen Ross refused to scream during the film. She felt that Fran was a strong female character, and if she screamed, the strength would be lost. She told this        to George Romero once, when he told her to scream.  He never asked her again.

7.  In addition to the lead biker Blades, Tom Savini plays the zombie who breaks the window of the truck and is shot by Roger with a revolver.

8.  Tom Savini was unhappy with how the blood mix photographed as he felt it looked fluorescent. George Romero felt it was perfect for the film’s comic book            style.