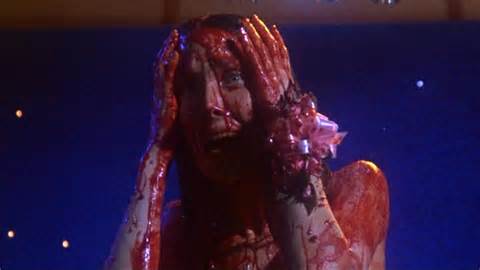 10. The fake blood dropped on Sissy Spacek kept drying and adhering to her skin because of the hot lights. The only solution was to hose her down when the substance got gluey.

9. In the second-to-last scene (where Amy Irving lays flowers on Carrie’s grave) to make it more “eerie”, the shot was filmed backwards – then run in reverse in slo-mo – to give it a surreal effect.

8. Brian De Palma had to dump a scene from the novel where Carrie blows up petrol stations with her mind, setting the town on fire. The effects work would have been too expensive.

7. While filming the bloody prom sequence, Sissy Spacek’s trailer was parked behind the set. After being covered in fake blood, for continuity purposes, Spacek refused to wash the effect off. She elected instead to sleep in her bloody clothes for three days of filming.

5. For when the fire hose kills P.J. Soles’s character, the water pressure actually burst her eardrums. Soles is not actually unconscious when her head rolls to the side from the force of the fire hose, but she is in terrible pain and has lost her ability to maintain equilibrium (which is governed by the ear). Brian De Palma decided to keep the shot in. Soles had no hearing in that ear for about six months afterward, though the eardrum did eventually heal.

3. To become Carrie, Sissy Spacek would intentionally avoid socializing with the other actors on and off set. She would stay in her trailer, or hide in the corner, or behind the set.

2. The ring that Amy Irving wears throughout the movie was a gift to her from Stephen King the author of the book the film is based on.

1. Many of the girls present in the locker room were originally hesitant to appear nude in the film, but after Brian De Palma showed them the nude shots of Sissy Spacek, they became more confident.