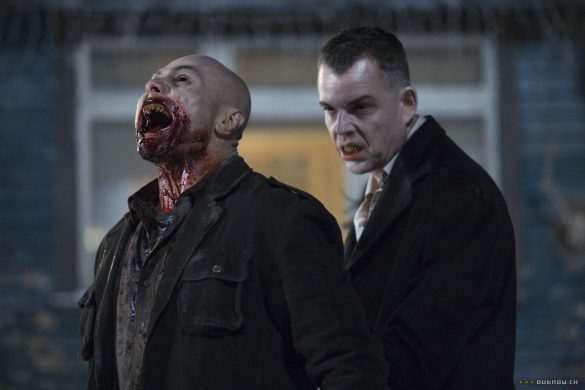 Ten Things You Might Not Know About … 30 Days of Night!

1. Prints were shipped to some theaters under the fake title “Red Impression”.

2. Sam Raimi was slated to direct the film when the script was in its earliest stages, but Raimi opted to produce instead.

3. All of the vampires have names; they’re not mentioned until the end credits

4. Shot in New Zealand. Nearly half of the cast is from New Zealand or Australia

5. A picture of Steve Niles, who wrote the original comic book, hangs in the attic hideout

6. The little girl vampire has arm tattoos that are visible for a few frames. The stick figure-like tattoo on her right arm is the logo of German industrial band Einstürzende Neubauten.

7. Most of the night shots were shot during the day, using the day-for-night process

8. Josh Hartnett did his own stunts. Melissa George did most of Stella’s driving.

9. The vampires speak a completely original language. It was created for the film with the help of a linguistics professor at a New Zealand university.

10. The setting of Barrow is a real city in Alaska.